Iranian nuclear issue can only be resolved via negotiated solution – Ban

The dispute over the status of Iran’s nuclear programme can only be resolved “through a negotiated political solution that restores international confidence in the exclusively peaceful nature” of the programme, Secretary-General Ban Ki-moon stressed today.

Iran’s full cooperation with relevant Security Council resolutions on its nuclear programme is particularly important, Mr. Ban said, according to information provided by his spokesperson after the meeting with the Iranian leader.

Iran has repeatedly stated that its nuclear programme is for the peaceful purpose of providing energy, but many countries contend it is seeking to develop nuclear weapons and last year the Security Council imposed a fourth round of sanctions against it, citing the proliferation risks of its nuclear programme and Iran’s continued failure to cooperate with the UN International Atomic Energy Agency (IAEA).

The issue has been of international concern since the discovery in 2003 that Iran had concealed its nuclear activities for 18 years in breach of its obligations under the Nuclear Non-Proliferation Treaty (NPT).

During today’s meeting with Mr. Ahmadinejad, Mr. Ban emphasized the importance of respecting fundamental civil and political rights and encouraged Iran to make further efforts in this regard.

He added he was disappointed that Iranian authorities had executed a juvenile offender earlier this week, echoing the concerns expressed by a series of independent United Nations human rights experts.

Referring to Mr. Ahmadinejad’s address to the Assembly yesterday, Mr. Ban stressed that the UN should be respected as a forum for promoting tolerance, mutual respect and cross-cultural understanding and that any comments questioning historical facts such as the Holocaust or the 11 September 2001 terrorist attacks were unacceptable.

The Secretary-General also expressed appreciation to Mr. Ahmadinejad for the Iranian people’s generous support to the victims of the ongoing famine in Somalia, and he reiterated his welcome of the release earlier this week from an Iranian prison of two United States nationals. 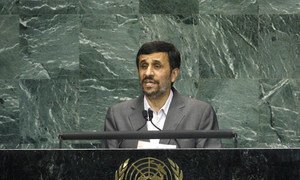 Iran’s President today called for a new global order, telling the General Assembly that “slave masters and colonial powers” dominate international affairs, oppressing other nations and causing misery and disorder to peoples around the world.