Gender equality is not just a basic human right but smart economics, Sweden’s Prime Minister Fredrik Reinfeldt said at the United Nations today, stressing that closing the gap between men and women in employment will have huge beneficial implications for the global economy.

“It would boost American GDP [gross domestic product] by as much as 9 per cent, [the] Euro-zone by 13 per cent and Japanese GDP by 16 per cent,” said Mr. Reinfeldt in his address to the third day of the General Assembly’s annual general debate.

An estimated 3.5 billion women and girls are denied their socio-economic rights across the world yet they perform 66 per cent of the work and produce 50 per cent of the food, according to Mr. Reinfeldt.

Increased gender equality is an investment for the future, he noted. Evidence from a range of countries showed that when women take greater control of household income, more money was spent on children’s needs including food, health and education.

When women played a role in society by shaping institutions and being active in politics and business, there were improvements in the public good and less corruption.

“In short, I see gender equality not as a crucial human rights issue, but also a question of smart economics.

“I would urge all representatives sitting in this room: Imagine what it would mean in terms of economic growth for your countries if women were allowed to fully participate in society.”

The Swedish leader also stressed that the UN must play a leading role in embracing and maintaining the emerging progress towards democracy and freedom of expression in parts of the world where civil liberties have been suppressed. 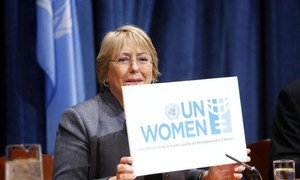 Boosting women’s political participation and decision-making around the world is fundamental for democracy and essential for achieving sustainable development, women leaders taking part in a high-level event at the United Nations declared today.