The cultivation of coca bushes in Bolivia has remained stable over the past year with 31,000 hectares planted with the shrub, the raw material for the manufacture of cocaine, according to a new survey by the United Nations Office on Drugs and Crime (UNODC).

“This is encouraging news,” said Cesar Guedes, the UNODC Representative in Bolivia, after the report’s release yesterday. “Cultivation levels have fallen well below those of the 1990s and that trend looks set to continue.”

The annual survey, jointly produced by UNODC and the Bolivian Government, indicated that the Andean nation accounted for 20 per cent of coca cultivation in Latin America last year.

The survey showed slight regional fluctuations within Bolivia, notably a decrease of 2 per cent in Yungas de la Paz, which was offset by an increase of 4 per cent in Chapare. Yungas alone was responsible for 66 per cent of cultivation nationwide.

Coca leaf prices rose by 22 per cent in authorized markets and by 37 per cent in illegal markets. The value of coca leaf production in Bolivia was $310 million, or 1.7 per cent of the country’s gross national product (GNP). 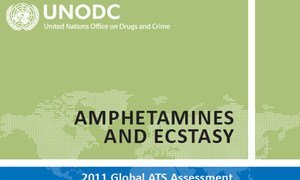 Amphetamine use on the rise worldwide, new UN report finds

The use of amphetamine-type stimulants such as ecstasy and meth is surging around the world, a new United Nations report finds, warning that the growing trade in these illegal drugs and the high profits they bring to criminals are posing an increasing threat to health and security.