UN chief takes to cyberspace for global conversation with public

The ‘global conversation,’ lasting just over half an hour and moderated by Juju Chang of the United States ABC television network, saw Mr. Ban sitting in a studio at UN Headquarters in New York as he fielded questions from countries as far apart as China and Canada, and South Africa and the Philippines.

More than 5,500 questions were sent in over recent weeks in the six official UN languages – Arabic, Chinese English, French, Russian and Spanish – as well as in Portuguese and Swahili, while others came in live during the event, which was simultaneously translated into Chinese through the Weibo social media network.

The first question, in Spanish on Twitter, asked when the UN would be reformed to match today’s needs, and Mr. Ban stressed the complexity of making decisions in an organization numbering 193 members.

A question from China, where more than half of the questions from the public were submitted, asked why so many people in Africa die of hunger when the world produces enough to feed all.

“It is true that we have at least a billion people who are starving from abject poverty,” Mr. Ban replied. “They go to bed hungry every night. That’s very sad. But ironically we have enough food all around the world.

“The question and problem is that they do not distribute it fairly, that’s a social injustice, and that we have to address and stop,” he added, also noting the effects of climate change and flooding, and citing the mitigating efforts the UN was making such as providing fertilizers and weather-resistant seeds.

Some questions dealt with more general issues such as peacekeeping and corruption (“it is the cancer of our society, it must stop,” Mr. Ban said), while others targeted specific topics such as the Palestinian issue (“I’m a strong supporter of this two-state vision” – Palestine and Israel), and war-torn and famine-stricken Somalia (“I sincerely hope the international community will provide the generous humanitarian assistance”).

One question from China asked Mr. Ban about his early life and career, and he recalled how he was brought up poor in a country devastated by the Korean war, was given the opportunity as a high school student to travel round the United States where he met then president John F. Kennedy, and decided on a life of public service.

Most questions were from people generally unknown to the public at large, but one came in live from British celebrity chef Jamie Oliver, who asked how the world can reduce the number of 35 million people who die every year from non-communicable diseases. These include cancer, stroke, heart disease and diabetes.

“This is a totally unacceptable situation,” Mr. Ban said, stressing that the UN is convening its first ever high-level meeting on the issue at next week’s General Assembly opening session.

“This can be cured by medical support. This can also be prevented by simply changing your lifestyle like your behaviour. This obesity or this diabetes and all these, you can change your lifestyle, and alcohol or smoking. By stopping this you can save your life.”

Ms. Chang said that the blogosphere had been very active during the event and thousands of people had been listening in and contributing to the conversation. 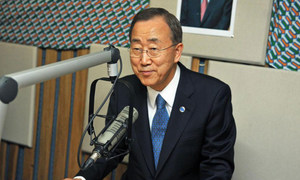 Secretary-General Ban Ki-moon will tomorrow hold his first live “global conversation” with members of the public through social media networks, answering questions on a range of pressing United Nations issues.