World must pull together in face of unprecedented challenges, Ban warns

Reaching into the sport of rugby for metaphor and the lore of the Maoris, New Zealand’s original inhabitants, for wisdom, Secretary-General Ban Ki-moon made a fervent appeal today for unprecedented global cooperation to meet an exceptional host of complex challenges.

“This week, New Zealand is the magnificent meeting ground of both the world of diplomacy and the world of rugby,” he said in an address at Auckland University, New Zealand’s largest city, which is hosting a summit meeting of the Pacific Islands Forum while the country at large prepares to hold the Rugby World Cup, opening on Friday.

“I have come to realize that those worlds are not as different as you might think. In rugby, you lose teeth. In diplomacy, you lose face. Rugby scrums confuse anyone who doesn’t know the game. So do UN debates. And sometimes they can look very similar.

“And yet, in heart and spirit the Rugby World Cup is a celebration, a celebration of common values and a way of life: teamwork, mutual respect, solidarity. The qualities of grit and determination – all very useful, I have found, in the world of diplomacy,” he added in a speech that touched on climate change, security, sustainable development, the global economic crisis and the sweeping democracy movements in North Africa and the Middle East.

All these challenges mark a time of global transition and global uncertainty, a pivot-point in history that demands big thinking and bold action that have nothing to do with business as usual, a degree of cooperation that is unprecedented and in which the word’s young, like those attending his speech at Auckland University, have a major, even a vanguard role to play, he said.

“Maori wisdom puts it best: He waka eke noa – we are all in this canoe together,” Mr. Ban said, noting that no there is no opt-out clause for global problem-solving. “In other words, we must unite and squarely face the anxieties and the opportunities of the 21st century…

“And, my friends, in many ways, that effort starts with you – the young people of our world. You are the most potent force to hold leaders to account, to transform your communities, to build a better world. So I urge you: Don’t wait for others. Get engaged. Speak out.”

On specific issues Mr. Ban noted the world community came together six months ago to protect the people of Libya from a massacre by their own Government, and again a few days ago to help Libyans fulfil their dreams for peace, democracy and prosperity after the ouster of Muammar al-Qadhafi’s regime. He said this was part of a broader trend that has seen the removal of an intransigent autocrat in Côte d'Ivoire, and Sudan and South Sudan start a new chapter as separate nations.

He repeated his call to Syrian President Bashar al-Assad to end the excessive use of force by his security forces and initiate reform. “In crises such as these, the international community must do its utmost to act in concert, consistent with our common and most sacred values,” he said, stressing the need to protect people threatened with extreme violence for exercising basic rights.

“In situations where a government cannot – or will not – protect its people, we have a common obligation to act. At the UN, in cases such as genocide or crimes against humanity, we are called upon exercise a responsibility to protect.”

He again highlighted that there can be no sustainable security without sustainable, broadly shared development, noting that today the poorest 40 per cent of the world’s population hold just four per cent of its income. “And there are no signs of improvement. Something has to give,” he said. “In fact, there is no need to speculate whether this is a recipe for instability, violence, conflict.

“Open any newspaper. Look out the window. Around the world, we see youth unemployment soaring. We see societies pulling apart. And we see yet more evidence that security and sustainability are two sides of the same coin.”

On climate change Mr. Ban noted that his visit to the low-lying island nation of Kiribati on his way to Auckland showed that this was not a problem for tomorrow.

“It is lapping at our feet, quite literally,” he said. “This region is on the front of the front lines of climate challenge… With waves rising ever higher in this neighbourhood, the oceans are also sending a signal that something is seriously wrong with our current model of economic development.”

♦ Receive daily updates directly in your inbox - Subscribe here to a topic.
♦ Download the UN News app for your iOS or Android devices.
Pacific 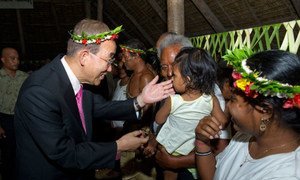 Secretary-General Ban Ki-moon and the President of Kiribati, Anote Tong, today stressed that climate change posed the most serious threat to the livelihoods, security and survival of the island nation's residents and the inhabitants of the wider Pacific region, saying the phenomenon was undermining efforts to achieve sustainable development.