Margot Wallström, Special Representative of the Secretary-General on Sexual Violence in Conflict
2 September 2011

“It is an important signal of respect for freedom of expression by the Sudanese Government,” said Margot Wallström, the Secretary-General’s Special Representative on Sexual Violence in Conflict, of the presidential pardon issued last Saturday.

“I hope that the pardon will be extended to all media representatives and acted upon without delay,” she added in a statement.

Ms. Wallström stressed that the pardon must pave the way for increased public debate in Sudan on subjects traditionally regarded as taboo, particularly sexual violence.

“The journalists working to break the silence about acts of alleged rape should be seen as allies and partners. Our common enemy is the conspiracy of silence that too often surrounds this crime. I reiterate that rapists – not reporters – must face criminal charges in the Sudan,” she said.

She said her office looked forward to working with the Sudanese authorities to deepen reporting and analysis of sexual violence as a basis for meaningful action, noting that such action will benefit the women of Sudan, their families and communities.

Ms. Wallström had early last month voiced concern after a court jailed a journalist for covering the case of an alleged rape of an activist by members of the security forces.

Amal Habani, a reporter for the independent daily Al-Jarida, had reportedly been sentenced to pay 2,000 Sudanese pounds ($600) or go to jail for one month. She opted to go to jail.

Another female reporter for the same daily, Fatima Ghazali, had earlier received a similar punishment for reporting on alleged rape, according to local media reports.

♦ Receive daily updates directly in your inbox - Subscribe here to a topic.
♦ Download the UN News app for your iOS or Android devices.
sexual|violence 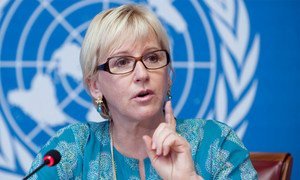 A senior United Nations official today voiced her concern after a Sudanese court jailed a journalist for covering the case of an alleged rape of an activist by security forces, stressing that it is the perpetrators that must face criminal charges, not those reporting on such crimes.