Philippines ratifies the Rome Statute of the International Criminal Court

Philippines today acceded to the Rome Statute, the treaty that established the International Criminal Court (ICC), when it deposed its instrument of ratification at the United Nations in New York.

The Statute will enter into force for the Philippines on 1 November, bringing the total number of States that have joined the Rome Statute system to 117.

ICC President Sang-Hyun Song, who visited the Philippines and other South-East Asian countries in March to facilitate consultations on ratification, applauded the move.

“This act is yet another indication of Asia’s growing role in the international community’s efforts to put an end to impunity for the most serious crimes of concern to humanity,” said Mr. Song, speaking in The Hague where the ICC is based.

“I send my heartfelt congratulations to all those in the Philippines who worked hard to make this day possible, and I hope that this historic decision will serve to dispel unfounded concerns about joining the ICC among other Asian nations.”

The ICC is the first permanent international court set up to prosecute individuals for genocide, crimes against humanity, war crimes and the crime of aggression.

♦ Receive daily updates directly in your inbox - Subscribe here to a topic.
♦ Download the UN News app for your iOS or Android devices.
international criminal court 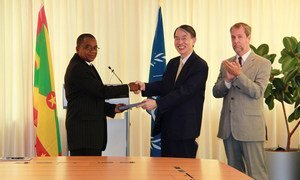 Grenada accedes to the Rome Statute of the International Criminal Court

The International Criminal Court (ICC) today welcomed Grenada as a new State party to the Rome Statute, the treaty that established the tribunal, three months after the Caribbean nation deposited its instrument of accession to the accord, becoming the 115th signatory.