The Security Council today discussed steps to improve United Nations peacekeeping capacities, with Secretary-General Ban Ki-moon calling for greater flexibility and funding to meet the ever more complex needs of missions that currently field some 100,000 blue helmets in hot spots around the world.

“We may be entering a new phase, with diverse and multifaceted situations where peacekeeping may play a role,” he said, noting that the number of uniformed personnel in UN peacekeeping operations has doubled in the past 10 years, reaching a high point of more than 101,000 last year.

“Peacekeeping will need to evolve to meet specific demands in a variety of environments and to flexibly and nimbly bring together multiple capabilities in a coherent and effective manner.”

In convening the session, India, which holds this month’s rotating presidency of the 15-member Council, underscored the “severe mismatch between the resources and the mandates of peacekeeping operations,” noting that total expenditure for UN peacekeeping in the last two decades was under $50 billion, reportedly less than the annual outlay for the International

Yet ISAF has roughly the same number of personnel as the UN is fielding in 15 operations around the world for a total outlay this year of less than $8 billion.

Stressing the requirements for successful peacekeeping, Mr. Ban highlighted the need for a clear and achievable mandate, unified political support from the Security Council, and adequate, predictable human, material and financial resources. Where this has occurred, there has been considerable success, he said, as in Liberia, Timor-Leste, or with the referendum on the secession of South Sudan.

“Notwithstanding the responsibility of host governments, peacekeepers are increasingly tasked to take on the protection of civilians, placing higher demands on their work, greater scrutiny on their performance, and a growing need for sufficient resources to properly carry out such mandates,” he said.

Mr. Ban noted that aspects of the requisite partnership linking the resources of the Secretariat, the Security Council, troop- and police-contributing countries and the wider UN membership of the Organization are under increasing pressure.

“The current financial climate, differing perspectives on mandated tasks, and, in some instances, the loss of host government consent have all created tensions in our relationships,” he added.

A required collective response is also complicated when key stakeholders such as those who mandate missions, those who contribute uniformed personnel and the major funders are separate groups.

“If these groups remain distinct even as mandates become more demanding, tensions and divisions are inevitable, with potentially negative impacts on our operations,” Mr. Ban said.

“Peacekeeping is one of the most visible, difficult and critical roles played by the United Nations. It is also a role which only the UN can play in a truly global sense,” he stressed.

In a presidential statement, the Council recognized the importance of providing peacekeeping operations with “clear, credible and achievable mandates” with the necessary operational and logistical resources, and pledged to work on mechanisms to improve its access to military advice, including from troop-contributing countries. 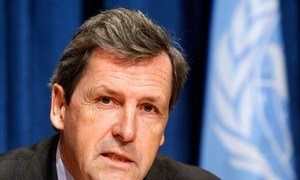 The outgoing head of United Nations peacekeeping today outlined the achievements of his department’s numerous missions around the world, saying peacekeepers had protected civilians and brought stability to many countries where they were deployed.