The United Nations paid homage to humanitarian workers around the world today with ceremonies of remembrance for the fallen, and praise and songs of tribute for the hundreds of thousands of others who daily brave danger and hardship to bring aid to those less fortunate.

“Wherever there are people in need, there are people who help them – men and women coming together to ease suffering and bring hope,” Secretary-General Ban Ki-moon said in a message on World Humanitarian Day, which coincides with the anniversary of the worst terrorist attack against the UN in Baghdad eight years ago.

“From Japan to Sudan, from Pakistan to the Horn of Africa, aid workers help people who have lost their homes, loved ones and sources of income,” he added, citing four countries or regions that have suffered respectively from a recent tsunami and nuclear crisis, war and displacement, massive flooding, and severe drought and deadly famine.

The General Assembly proclaimed 19 August as World Humanitarian Day three years ago to commemorate the 2003 Canal Hotel bombing in Baghdad, which claimed the lives of 22 UN staff members, including the world body’s top envoy in Iraq, Sergio Vieira de Mello, and wounded more than 150 people.

Mr. Ban laid a wreath in remembrance of the fallen 22 at UN Headquarters in New York besides the tattered UN flag that flew over the UN premises in Baghdad. The event was organized by the UN Staff Union. Many others have died elsewhere around the world, including 102 UN personnel who were killed in last year’s earthquake in Haiti in one of the most devastating blows the Organization has suffered.

At a ceremony, launching the Day in the General Assembly Hall, a music video entitled If I Could Change, a collaboration between various artists – including Ziggy Marley, Somali sister-duo Sweet Rush, and Salman Ahmad from the Pakistani band Junoon – was premiered in honour of humanitarian workers around the world.

While the video takes a kaleidoscopic look, from children in refugee camps and patients in hospitals to youngsters in schools and the feeding of infants, from flooded fields to injured being extracted from ruined buildings, the singers belt out a lyrical plea for greater love among peoples in a world free from fear and pain, where children no longer die of thirst.

“I hope that the song will inspire a new generation of humanitarian workers and indeed inspire people everywhere to get involved,” Under-Secretary-General for Humanitarian Affairs Valerie Amos told a later news conference. “It’s all about the fact that we can all change our world for the better.”

The theme of this year’s celebration is “People Helping People,” a message highlighted by the UN Office for the Coordination of Humanitarian Affaires (OCHA).

“Everyone can be a humanitarian,” OCHA said in a message. “People affected by disasters are the first to help their own communities following a disaster. Communities, local partner organizations, international organizations and the general public can build a chain of solidarity to support communities in responding to and recovering from disasters.”

It was a theme that Mr. Ban stressed at the launch ceremony, calling the Day “a celebration of men and women around the world who have decided to dedicate their lives to helping others, people with drive and talent, who could have chosen any other path in life and succeeded, yet they chose to help.

“Their decision shows us a glimpse of a better world – where people help people, no matter who they are, where they are from, or what they believe.”

Ms. Amos noted that last year alone 242 aid workers were killed, injured or kidnapped. “They go on regardless because they know that the situation is so serious and we cannot afford not to help,” she said. “So we owe it to them and to aid workers everywhere to do far more to protect them from harm.”

At the ceremony and later news conference both Ms. Amos and UN Children's Fund (UNICEF) Executive Director Anthony Lake dwelt at length on the Horn of Africa, with more than 12 million people in urgent need of help in Kenya, Ethiopia, Djibouti and particularly Somalia, where drought, conflict and poverty have combined to produce the gravest food crisis in the world. Tens of thousands of people, many of them children, have already perished.

Noting that help was still not reaching all those in need in the region, that the crisis had still not peaked and that the UN still needs more than $1 billion for its life-saving operations, Mr. Ban called on governments, civic groups and ordinary citizens to give, and give more. “Together, we can rescue a generation of people in the Horn of Africa and help secure their future,” he said.

Mr. Lake noted that the Day commemorates not only international workers but “national staff, who work not only for the children in their own countries, but for the future of their nations. We owe them a special debt of gratitude,” he said.

Special events marking the Day were held around the world, including panel discussions in places as diverse as Liberia and Australia, and Afghanistan and Geneva, Switzerland.

As Mr. Ban told the launch ceremony in New York, “World Humanitarian Day is a true celebration of what ordinary people with extraordinary dreams can do.

“Aid workers are, above all, people – dedicated, driven, full of life, but all the same, people. They are young, and they are old. They are women, and men. They come from all over the world. When crisis calls, humanitarians pack their bags and get to work.”

Or, as the lyrics of If I Could Change put it: “If I could change the world today/I’d turn the sky to blue from grey/Take away the hurt I see/Make sure that we all live happy.” 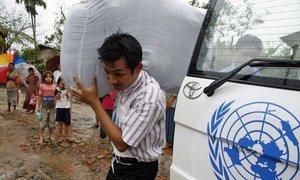 Secretary-General Ban Ki-moon marked World Humanitarian Day today by leading a chorus of United Nations officials in lauding aid workers – including some who have paid with their lives – for their tireless efforts to help those who have lived through wars, catastrophes and other terrible events.