The number of civilians killed in conflict in Afghanistan rose by 15 per cent in the first six months of this year, the United Nations mission in the country said today, releasing figures that showed 1,462 non-combatants died, with insurgents responsible for 80 per cent of the killings.

The number of civilians killed in conflict in Afghanistan rose by 15 per cent in the first six months of this year, the United Nations mission in the country said today, releasing figures that showed 1,462 non-combatants died, with insurgents responsible for 80 per cent of the killings.

The UN Assistance Mission in Afghanistan (UNAMA) said deaths attributable to anti¬government elements (AGEs) rose by 28 per cent compared to the same period last year, noting that the dramatic spike in casualties was mainly due to the use of landmine-like pressure plate improvised explosive devices (IEDs).

With 368 civilian deaths, May was the deadliest month for Afghan civilians since UNAMA began systematically documenting civilian casualties in 2007. Last month, a further 360 civilian deaths were recorded, 86 per cent of them attributable to AGEs, while 5 per cent were linked to PGF and 9 per cent were not attributed.

June also saw an all-time high in the number of security incidents in a single month and the highest-ever number of IED attacks recorded in a one-month period.

“Afghan children, women and men continue to be killed and injured at an alarming rate,” said Staffan de Mistura, the Special Representative of the Secretary-General for Afghanistan and head of UNAMA.

Air strikes remained the leading cause of Afghan civilian deaths by PGF, with an increasing proportion resulting from attacks by helicopters. In the first six months of 2011, 79 Afghan civilians were killed by air strikes, a 14 per cent increase compared to the same period last year. Fifty-six per cent of the 79 deaths from air strikes were caused by helicopter attacks. All aerial attacks in Afghanistan are carried out by the International Security Assistance Force (ISAF).

Civilian deaths from ground combat and armed clashes in the first half of 2011 increased by 36 per cent compared to the same period last year when there were a total of 304 civilian killed, 188 of the deaths attributed to AGEs, 66 to PGF, and 50 linked to people being caught in the crossfire.

Responsibility for security is transitioning from international military forces to Afghan forces in several parts of Afghanistan in July. Violence rose in the first half of 2011 as AGEs sought to disrupt this process. Combined with the efforts of various armed groups to undermine peace and reconciliation and intensified fighting between the rival parties, Afghans experienced a decrease in protection, according to UNAMA.

A shift in the tactics of the AGEs increased the severity of their attacks on Afghan civilians, UNAMA’s analysis found. “In 2011, anti-government elements expanded their use of unlawful means of warfare, particularly victim-activated pressure plate IEDs that act like anti-personnel landmines and cannot distinguish between a military target and a civilian,” said Georgette Gagnon, Director of Human Rights for UNAMA.

“This tactic violates Afghans’ basic right to life and contravenes the international humanitarian law principles that all parties to the conflict are bound to uphold to minimize civilian loss of life and injury,” she said.

Two thirds of all IEDs used in Afghanistan, and the vast majority that kill civilians, are designed to be triggered by a weight of between 10-100 kilogrammes, the weight of a human being, and in many cases that of a child, meaning that such IEDs function effectively as massive anti-personnel mines.

“Any civilian who steps on or drives over these IEDs has no defence against them and little chance of survival,” said Ms. Gagnon. “Any use by Taliban members of these pressure-plate IEDs violates the 1998 Taliban ban on any type of landmines. UNAMA calls on the Taliban to publicly reiterate a ban on these.”

Targeted killings of Afghan civilians by AGEs continued at last year’s high rate. Between January and June this year, UNAMA documented 191 targeted killings compared to 181 in the same period in 2010.

UNAMA urged AGEs to use the meaning of “civilian” that is consistent and in compliance with their obligations under international humanitarian law. Under the law, “civilians” are all persons who are not combatants or members of organized armed groups of a party to the armed conflict.

“All civilian deaths and injuries, no matter what party is responsible, have tragic and lasting impacts on families and communities,” said Mr. de Mistura. “Civilians will only ‘win’ in Afghanistan when civilian casualties decrease across the board.”

UNAMA also urged parties to the conflict to do much more to strengthen civilian protection and fully comply with their legal obligations to reduce civilian casualties and harm to civilian communities. 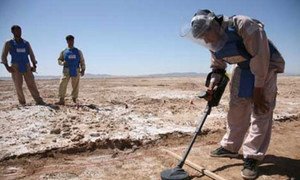 The United Nations has strongly condemned the brutal killing of four de-miners in the western Afghan province of Farah, stating that attacks on those who deliver humanitarian services are totally unacceptable.