A group of independent United Nations experts today called for the adoption of binding international regulations to control the activities of private security companies.

José Luis Gómez del Prado, the Chairman of the UN Working Group on Mercenaries, told a news conference at UN Headquarters that “the international community needs clarification on the jurisdiction” of such companies.

Mr. Gómez said there is a legal “gap” between recognized international conventions on the use of mercenaries, and the control of private security companies that are often used by governments and non-governmental organizations (NGOs).

The Working Group had already submitted proposed legislation to the General Assembly and the UN Human Rights Council in Geneva which were being discussed at the expert level.

Mr. Gómez said that many countries had proposed self regulation and codes of conduct, but the panel is proposing a specific international instrument that would be agreed on by national governments.

“What we are proposing is a binding instrument for States that is very clear” to include licensing, national and international monitoring of activities and civil and criminal laws regulating them.

The instrument, he said, would also have measures specifically to deal with victims.

Noting that four years after the killing of 17 civilians in Nissour Square in Iraq, the case against the alleged perpetrators is still pending in United States courts, he said “The victims don’t receive justice.”

The panel visited Iraq last month and urged the Iraqi Government to prioritize the adoption of legislation regulating security companies that has been pending since 2008.

“While US troops are scheduled to leave Iraq by the end of the year, security contractors are there to stay. The urgency to regulate their activities couldn’t be greater,” he said today.

Alexander Nikitin, a member of the Working Group, said the different methods of control for private security companies in Iraq and Afghanistan highlighted the need for international standards.

The Group reports to the Human Rights Council in an independent and unpaid capacity.

♦ Receive daily updates directly in your inbox - Subscribe here to a topic.
♦ Download the UN News app for your iOS or Android devices.
mercenaries 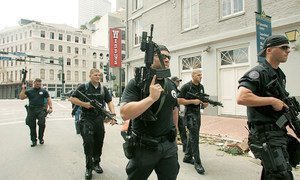 While the number of incidents involving private military and security companies in Iraq has decreased in recent years, the Government should continue to regulate and monitor their activities, a group of independent United Nations human rights experts said today.