The first woman ever charged with genocide by an international court was today convicted of the crime and sentenced to life in prison by the United Nations war crimes tribunal set up in the wake of the mass killings in Rwanda in 1994.

Pauline Nyiramasuhuko, 65, a former Rwandan government minister of family and women’s development, was found guilty by the International Criminal Tribunal for Rwandan (ICTR) of genocide, conspiracy to commit genocide, crimes against humanity (extermination, rape and persecution) and several serious violations of the Geneva conventions.

ICTR judges also convicted Ms. Nyiramasuhuko’s son Arsène Shalom Ntahobali and four others of similar charges as part of what is known as the Butare case, after the Rwandan prefecture where the crimes took place.

During the Rwandan genocide, which began in early April 1994, Butare initially served as a haven for people fleeing massacres carried out in other regions of the country, with the area regarded as having relatively harmonious inter-ethnic relations between Tutsis and Hutus.

But Ms. Nyiramasuhuko and others conspired to remove a local official seen as posing an obstacle to the killing of Tutsis and to replace him with Sylvan Nsabimana, one of her co-accused in the Butare case.

As a Cabinet-level Government official, Ms. Nyiramasuhuko was found to have ordered and directed subsequent killings and rapes and participated in a broader effort to wipe out the local Tutsi population.

Prosecutors told the ICTR – which is based in Arusha, Tanzania – that roadblocks were set up to identify, abduct and kill Tutsis and Ms. Nyiramasuhuko and her son, in conjunction with soldiers, personally manned those roadblocks.

Mr. Ntahobali, a former student, and Elie Ndayamabaje, a former mayor of Muganza, were sentenced to life in prison after being convicted of similar offences to Ms. Nyiramasuhuko’s.

Mr. Nsabimana, a former prefect of Butare, was sentenced to 25 years in prison, while Alphonse Nteziryayo, another former Butare prefect, was handed a 30-year jail term. Joseph Kanyabashi, a former mayor of Ngoma commune, was given a 35-year prison sentence.

The trial of the six people in the Butare case took 10 years and was considered particularly complex, with nearly 200 witnesses and almost 13,000 pages of documents.

An estimated 800,000 Tutsis and moderate Hutus were killed in Rwanda in less than 100 days between April and June 1994, often with weapons such as machetes. 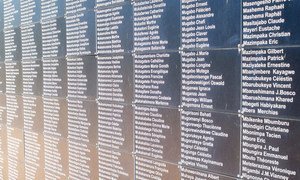 The United Nations tribunal set up after the 1994 genocide in Rwanda today convicted the country’s former army chief of committing numerous war crimes and sentenced him to 30 years in prison.