In West Africa, UN and partners pledge cooperation in fight against drugs and crime

United Nations officials, government ministers and representatives of Interpol pledged today to work together in the fight against drug trafficking and organized crime in West Africa, which has become a key transit point for the shipment of cocaine from Latin America to Europe.

At a meeting in Dakar, Senegal, participants discussed how to streamline their efforts against drugs and crime in the region, with the production of counterfeit medicines and the smuggling of cigarettes also identified as major problems.

The inaugural session of the High-Level Policy Committee of the West Africa Coast Initiative was chaired by Said Djinnit, the Secretary-General’s Special Representative for West Africa.

The meeting follows a regional action plan adopted in 2009 with the aim of tackling illicit trafficking, organized crime and drug abuse among locals.

That plan followed a report from the UN Office on Drugs and Crime (UNODC) which revealed that the value of illicit flows in the region sometimes surpassed the countries’ gross domestic product (GDP).

Cigarette smuggling in West Africa, for example, generates about $775 million, more than the GDP of the Gambia, while the trade in counterfeit anti-malarial tablets surpasses the GDP of Guinea-Bissau.

The attendees included representatives of the UN, the Economic Community of West African States (ECOWAS), the African Union (AU), the European Union (EU) and Interpol, as well as justice or interior ministers from Côte d’Ivoire, Guinea-Bissau, Liberia and Sierra Leone.

♦ Receive daily updates directly in your inbox - Subscribe here to a topic.
♦ Download the UN News app for your iOS or Android devices.
djinnit 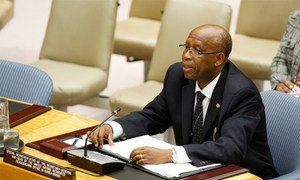 Guinea-Bissau still has a long way to go in fighting impunity, drug trafficking, organized crime, and other “remaining triggers of instability” in a country that has for years been dogged by war, coups, coup attempts and assassinations, a senior United Nations official warned today.