A senior United Nations official today hailed the action plan signed by the Government of Chad to end the use of children by the country’s security forces, while highlighting important next steps on the path to eradicating the scourge of child soldiers.

“The signature of the action plan reflects the political will and commitment of the Chadian Government to move forward in ending a key grave violation against children. While this is an achievement in itself, the bulk of the work lies ahead,” Radhika Coomaraswamy said at the signing ceremony in the capital, N’djamena.

Chad is one of only six governments listed by the Secretary-General for violations against children in conflict. The action plan signed today between the UN and the Chadian Government aims to ensure the release of all children associated with the Chadian National Army (ANT) and associated security forces.

Ms. Coomaraswamy, the Secretary-General’s Special Representative for Children and Armed Conflict, said the action plan is an expression of the Government’s “steadfast commitment” to building a protective environment for children in Chad.

It builds on the N’djamena Declaration of last year, in which Chad, along with five other States, pledged to take concrete measures to halt the recruitment and use of children by security forces and armed groups.

She noted that, once completed, the action plan will end a grave violation against children and have a direct impact on the lives of former child soldiers who will return home to their families.

“But it will also have wider repercussions for Chad, both domestically and internationally,” Ms. Coomaraswamy added. “Domestically, removing children from its fighting force will contribute to the professionalization of the armed forces.

“On the international stage, a complete and durable halt in the recruitment and use of children by the Chadian national army, including newly integrated elements, will trigger the removal of the Chadian Government from the Secretary-General’s ‘list of shame,’ annexed to his annual report on children and armed conflict.”

The Special Representative highlighted three key areas as Chad moves forward with the action plan – the need for close collaboration between the Government and the UN; the importance of taking a number of prevention measures to avoid a “revolving door” of child recruitment and use; and the need for the Government’s commitment to be matched by an international commitment to support the process.

While in Chad, Ms. Coomaraswamy met with representatives of the Government, the Chad-Sudan mixed force, civil society and the diplomatic community. Later this week she will visit eastern Chad to meet with the local population, refugees from the Darfur region of neighbouring Sudan and local leaders. 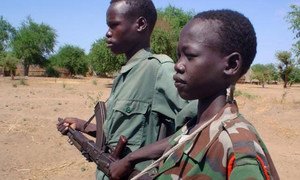 Use of child soldiers in Chad an ongoing problem – UN chief

The recruitment and use of children by armed forces and other armed groups in Chad persists, Secretary-General Ban Ki-moon says in a new report, while noting that reduced tensions last year enabled many children to leave such groups.