Anti-government protesters in Yemen
31 May 2011

United Nations officials today spoke out against the excessive use of force against anti-Government protesters in Yemen, where more than 50 people have reportedly been killed since Sunday in the city of Taiz and hundreds more have been injured.

According to unconfirmed reports received by the Office of the High Commissioner for Human Rights (OHCHR), the Yemeni army, Republican Guards and other Government-affiliated elements forcibly destroyed the protest camp in Horriya Square in Taiz using water cannons, bulldozers and live ammunition.

“Such reprehensible acts of violence and indiscriminate attacks on unarmed civilians by armed security officers must stop immediately,” High Commissioner Navi Pillay said in a news release. “I urge all sides to cease the use of force and I remind the Government of its responsibility to ensure that the fundamental human rights of its citizens are protected.”

Secretary-General Ban Ki-moon voiced his grave concern at the violence in Taiz as well as the escalating fighting in the capital, Sana’a, and other cities.

“He urges the Government and tribesmen engaged in violent confrontations in Sana’a to return to an immediate ceasefire allowing negotiations to take place,” Mr. Ban’s spokesperson said in a statement.

“The Secretary-General believes that all Yemenis should work towards defusing tensions and come together in a spirit of national unity for the sake of peace and stability in Yemen.”

In addition to the deaths and injuries in Taiz, at least 100 people are believed to have been arrested there over the weekend, while dozens remain unaccounted for. Ms. Pillay called on the Government to investigate cases of disappearances and the reports of ill-treatment, torture and killings, and to bring perpetrators to justice.

She also noted reports that security forces had occupied Al-Safa hospital in Taiz, that the field clinic in Horriya Square had been burned and that there was little or no access to emergency medical care.

“Adequate humanitarian access must be provided to all who need it – the Government is obliged to ensure this,” she said. “Medical staff and facilities must never be targeted by security forces.”

Last week OHCHR called on the Government to stop its deadly crackdown amid the renewed fighting which began after Yemen’s President, Ali Abdullah Saleh, refused for a third time to sign a deal to transfer power amid the pro-democracy protests that began earlier this year.

Ms. Pillay also voiced concern about reports of civilian casualties, including children, and mass displacement in the southern coastal town of Zinjibar.

“Further violence will only yield more insecurity and move the country further away from a resolution to this political crisis,” she stressed. “I urge all parties to continue efforts aimed at finding a peaceful solution to this conflict. The bloodshed must stop.” 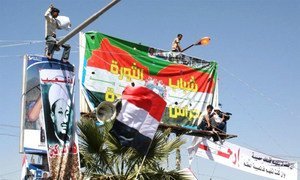 The United Nations human rights office today voiced alarm at the escalating violence in Yemen, which it said may push the country to the brink of civil war, and called on the Government to stop its deadly crackdown.