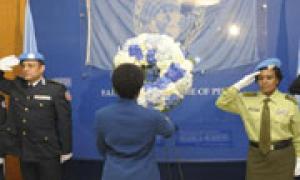 Secretary-General Ban Ki-moon today paid tribute to the more than 120,000 military, police and civilian personnel serving in the various United Nations peacekeeping missions across the world and honoured those who have lost their lives in the cause of peace.

Secretary-General Ban Ki-moon and the United Nations family today paid tribute to the more than 120,000 military, police and civilian personnel serving in peacekeeping missions across the world and honoured those who have lost their lives in the cause of peace.

“Their deployment is a manifestation of our collective conviction that people who have survived a war should not have to suffer again through a period of insecurity, injustice and fear – and that only by removing these conditions can we engender lasting peace,” Mr. Ban said in his message on the International Day of UN Peacekeepers, observed on 29 May every year.

In a separate statement, Mr. Ban condemned the attack that occurred today on a convoy carrying Italian peacekeepers serving with the UN Interim Force in Lebanon (UNIFIL) that resulted in several injuries.

“It is all the more deplorable because today is the International Day of United Nations Peacekeepers,” he said, adding that the UN will work closely together with the Lebanese authorities to have a “full and swift” investigation to bring the perpetrators to justice.

The marking of the Day this year was already a particularly sombre occasion. In early April, seven personnel were murdered in an attack on a UN compound in Afghanistan, and a few days later, 32 lives, many of them UN staff, were lost in the crash of a plane serving the UN peacekeeping operation in the Democratic Republic of the Congo.

Those incidents followed others involving fatalities around the world, including last year’s loss of a total of 173 peacekeepers to natural disasters, violence, accidents and disease, including the more than 100 who died in a single catastrophic event – the January 2010 earthquake in Haiti.

“The victims came from all over the United Nations system. They were military, civilian and police – UN volunteers and national staff,” Deputy Secretary-General Asha-Rose Migiro said in her remarks at a wreath-laying ceremony at UN Headquarters for fallen peacekeepers.

“They had different responsibilities, nationalities and interests. But they shared an abiding belief in the principles of the United Nations Charter. They put their lives on the line, so that others could have a safer and brighter future.”

The 73 peacekeepers who lost their lives between 1 March and 31 December last year as a result of hostilities, accidents and diseases posthumously received the Dag Hammarskjöld Medal at a ceremony presided over by Ms. Migiro. Twenty-six peacekeepers who died between 1 January and 10 April this year were also recognized at the ceremony.

“While it is Member States that authorize our missions, and governments that send us their uniformed personnel, in the end – the burden falls on individuals: in particular the men and women we posthumously honour today,” said the Deputy Secretary-General.

In his message, Mr. Ban noted that on the International Day, the world body not only remembers the heavy sacrifices of its staff, but it also hails their accomplishments.

“From supporting the Southern Sudan referendum to helping resolve the post-electoral crisis in Côte d’Ivoire, from supporting training, capacity-building and institutional development of police in Timor-Leste to patrolling the hills of southern Lebanon, United Nations blue helmets have represented the Organization at its best – restoring stability; fostering reconciliation; and nurturing hope for a better future,” he said.

This year’s observance highlights the important work that peacekeepers are doing to strengthen the rule of law in many of the post-conflict countries where they serve.

Mr. Ban stressed that upholding the rule of law is essential to successful peacekeeping and that it required strengthening confidence in police, justice systems and correctional services. “That is why the United Nations trains police to never abuse their power, supports the proper functioning of courts to serve justice, and works for humane conditions of detention,” he said.

Almost 60,000 UN personnel are today actively engaged with national counterparts to help rebuild, renovate and strengthen the foundations on which criminal justice systems are built, according to Dmitry Titov, the Assistant Secretary-General for the Office of Rule of Law and Security Institutions.

“Conflicts begin with a myriad of reasons. The United Nations aims to help post-conflict societies rebuild institutions that will make it possible for future conflicts to be managed peacefully,” he said during a press conference at UN Headquarters.

There are nearly 85,000 military personnel, more than 14,000 police officers, 5,700 international civilian and 13,700 national staff serving in 15 operations on four continents, according to the UN Department of Peacekeeping Operations (DPKO).

♦ Receive daily updates directly in your inbox - Subscribe here to a topic.
♦ Download the UN News app for your iOS or Android devices.
peacekeeeping

Uruguay: Helping the UN to keep the peace around the globe for nearly 70 years

Action for Peacekeeping: Progress made, but the work’s ‘far from done’

The head of the United Nations peacekeeping department today praised the role played by blue helmets in recent months in Sudan, Haiti and Côte d’Ivoire, saying their presence made a critical difference during difficult operating circumstances.