Reliable sources indicate the Syrian army is carrying out a major operation in the city at the centre of popular protests against the country's Government, firing at unarmed civilians, preventing medical personnel from helping the wounded, raiding mosques and arresting many others, a top United Nations official told the Security Council today.

B. Lynn Pascoe, Under-Secretary-General for Political Affairs, told Council members that the UN is requesting urgent access to the southern city of Deraa so that it can assess the humanitarian needs on the ground.

“There are reported shortages of medicine, water and food, and this could become a major humanitarian issue in the coming days,” Mr. Pascoe said in his briefing, a day after Secretary-General Ban Ki-moon also discussed the issue with the Council.

“Reputable reports” from both the media and human rights groups indicate that between 350 and 400 anti-Government demonstrators, many of them peaceful and unarmed, have been killed across Syria by security forces and their supporters since mid-March, according to Mr. Pascoe.

While the Government had made promises to reform in the wake of the demonstrations, and has lifted the state of emergency in place since 1963, it has also dramatically intensified its crackdown against opponents, particularly after last Friday's protests, he said.

Mr. Pascoe said the army started a “major military operation” in Deraa and surrounding villages, with tanks and large numbers of soldiers entering the area.

“Given the siege-like conditions, it is difficult to confirm our information, but reliable sources are consistently reporting the use of artillery fire against unarmed civilians; door-to-door arrest campaigns; the shooting of medical personnel who attempt to aid the wounded; raids against hospitals, clinics and mosques; and the purposeful destruction of medical supplies and arrest of medical personnel.”

The UN has confirmed that electricity, communication systems and water in Deraa have been cut since Monday, forcing the closure of schools and health-care facilities operated by the UN Relief and Works Agency for Palestine Refugees in the Near East (UNRWA) in the city.

Elsewhere, the towns of Douma, Al-Moadamiyah and Banias were also surrounded by tanks and armed forces, while there have been reports that security forces have opened fire on protesters in Jableh, killing at least 13 people in that city.

Mr. Pascoe noted that “there have been credible reports of a very few instances where protesters have used force, resulting in the deaths of members of the security forces? [but] there are no confirmed reports that this is a recurring phenomenon.”

The Under-Secretary-General said the denial of access to international and independent media was compounding the lack of transparency about the situation in many of the affected towns and cities.

“The Committee to Protect Journalists and numerous other sources note that the Syrian authorities continue to detain journalists on a regular basis, disrupt Internet and phone service, prohibit entry to the country of international journalists, and block all access to areas of unrest.

“One cumulative effect of this policy is to prevent the collection and dissemination of accurate and impartial information, leaving observers unable to confirm or deny many allegations.”

Mr. Pascoe stressed that “repression is not the solution. An inclusive dialogue and genuine reforms should address the legitimate aspirations of the Syrian people, restore confidence and ensure social peace and order.”

Syrian Ambassador Bashar Jaafari said the country's security forces had exercised the utmost restraint to avoid the killings of civilians, and he said armed criminal elements – supported by some foreign countries and extremist groups – were responsible for the violence.

Mr. Jaafari said the Government would continue to undertake reform measures and try to satisfy the “legitimate demands” of its people.

Since the unrest erupted Mr. Ban has repeatedly condemned the violence against the protesters and called for an “independent, transparent and effective” investigation into the killings.

He told journalists yesterday that “it goes without saying that Syrian authorities have an obligation to protect civilians and respect international human rights. That includes the right to free expression and peaceful assembly.”

The UN Human Rights Council, for its part, will hold a special session on Friday on the situation in Syria after a request from the United States on behalf of 16 Member States.

The protests in Syria in recent weeks are part of a broader uprising this year across the Middle East and North Africa that has already brought down long-standing regimes in Tunisia and Egypt and led to open conflict in Libya. 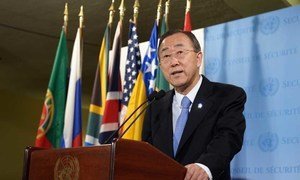 Secretary-General speaks out against killings of peaceful protesters in Syria

Secretary-General Ban Ki-moon today expressed “increasingly grave concern” about the situation inside Syria, where hundreds of peaceful demonstrators protesting against the Government have been killed or injured in recent days.