The United Nations Food and Agriculture Organization (FAO) has published a book celebrating the rich biodiversity of the Southern Caucasus and calling for its preservation.

“Gardens of Biodiversity” is part of FAO’s contribution to the International Year of Biodiversity and celebrates the rich diversity of crops and farming techniques of the Southern Caucasus, which comprises Armenia, Azerbaijan and Georgia.

“The Southern Caucasus is a treasure trove of biodiversity that must not be lost. Only concrete action will ensure that present and future generations can continue to improve their food security and livelihoods. Today we must ‘wake-up’ and engage in identifying, maintaining and using our genetic resources to meet the challenges of the future to feed a growing world population,” said Caterina Batello, Senior FAO Officer and one of the book’s authors.

Through photographs, the book documents the genetic resources, rural life and traditional food practices particular to the region, home to some of the earliest evidence of humans practicing farming and the birthplace of many common foods found on plates all over the world.

Crops such as wheat, grapes, apples, apricots, pomegranates, pears and peas are listed as originating in the region, where the hot summers, cold winters and mountainous terrain provide an ideal climate and geography for rich crop diversity.

The diversity is also preserved and promoted by small-scale farming techniques common to the region, with strong attachment to traditional food production systems that have helped to encourage diversity of crops like wheat. All three countries maintain rich collections in their national seed banks

“We have to store germplasm in seed banks, but we also need farmers to preserve and use this genetic material in their day-to-day activities. This book pays homage to that, and we hope it will help focus on the role of farmers in the Southern Caucasus and elsewhere in this important task,” said Ms. Batello.

The International Year of Biodiversity provides a timely opportunity to focus on the urgency of safeguarding biodiversity for the wealth, health and well-being of people in all regions of the world, with the idea that restoration of ecosystems can generate wealth, create jobs and alleviate poverty. 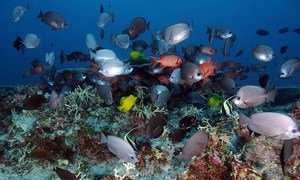 Managers from the 43 marine sites on the World Heritage List of the United Nations Educational, Scientific and Cultural Organisation (UNESCO) began their first-ever meeting in Hawaii today to explore ways of strengthening the conservation of these “crown jewels of the ocean.”