UNRWA/Shareef Sarhan
Mud-brick houses being built by UNRWA as temporary shelter for families in Gaza.

In a 56-page report, the fact-finding mission, which is separate from Secretary-General Ban Ki-moon’s four-member panel of inquiry into the same incident, found that the action of the Israeli Defense Forces (IDF) in intercepting one of the ships, the Mavi Marmara, on the high sea was “clearly unlawful.”

Nine civilians lost their lives and several more were seriously injured in the incident against the flotilla that departed from Turkey and was trying to deliver humanitarian aid to Gaza, which has been the subject of an Israeli blockade since 2007.

“The conduct of the Israeli military and other personnel towards the flotilla passengers was not only disproportionate to the occasion but demonstrated levels of totally unnecessary and incredible violence,” the report states.

“It betrayed an unacceptable level of brutality. Such conduct cannot be justified or condoned on security or any other grounds. It constituted grave violations of human rights law and international humanitarian law.”

The report, which was made public yesterday, presents a factual description of the events leading up to the interception of each of the six ships in the flotilla as well as a seventh ship intercepted on 6 June, the deaths of nine passengers and wounding of many others, and the detention of passengers in Israel and their deportation.

The three-member mission said there is clear evidence to support prosecutions of crimes such as wilful killing, torture or inhuman treatment, and wilfully causing great suffering or serious injury to body or health.

It also voiced regret that the Israeli Government declined to cooperate with the mission, and that this is not the first time that this has happened.

“On yet another occasion of an enquiry into events involving loss of life at the hands of the Israeli military, the Government of Israel has declined to cooperate in an inquiry not appointed by it or on which it was significantly represented.”

The mission, chaired by Judge K. Hudson-Phillips, former judge of the International Criminal Court (ICC) in The Hague, interviewed more than 100 witnesses in Geneva, London, Istanbul and Amman during the course of its work.

Sir Desmond de Silva, Queen’s Counsel, who was chief prosecutor of the Sierra Leone War Crimes Tribunal, and Shanthi Dairiam, human rights expert of Malaysia and former member of the Committee on the Elimination of Discrimination against Women, are also on the team, which will present its report to the Geneva-based Human Rights Council next week. 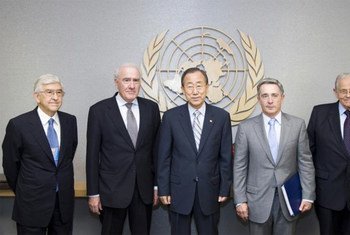 27 August 2010
The United Nations Human Rights Council’s international, independent fact-finding mission of high-level experts inquiring into the Gaza flotilla incident on 31 May has wrapped up a week-long visit to Turkey.