The Central African Republic and Trinidad and Tobago today ratified the United Nations-backed treaty that prohibits all nuclear tests, bringing the total number of countries bound by the global ban to 153.

The Comprehensive Nuclear-Test-Ban Treaty (CTBT), which opened for signature in 1996, has been called “a fundamental building block for a world free of nuclear weapons,” by Secretary-General Ban Ki-moon.

“By establishing a global norm against testing, the CTBT has made a significant contribution to the world community’s efforts to prevent the proliferation of nuclear weapons and to promote nuclear disarmament,” Mr. Ban told a conference held in New York last September to facilitate the treaty’s entry into force.

The remaining nine are China, the Democratic People’s Republic of Korea (DPRK), Egypt, India, Indonesia, Iran, Israel, Pakistan and the United States. Indonesia announced on 3 May that it had initiated the CTBT ratification process.

“Following the great news from Indonesia that it will soon ratify the treaty and reduce to eight the number of States whose ratification is necessary for its entry into force, these two additional ratifications bring us closer to the universality of the treaty,” said Tibor Tóth, Executive Secretary of the Preparatory Commission for the Comprehensive Nuclear-Test-Ban Treaty Organization (CTBTO).

The CTBTO is building a verification regime to monitor compliance with the treaty. When complete, 337 facilities around the world will monitor underground, the oceans and the atmosphere for any sign of a nuclear explosion.

The ratifications by the CAR and Trinidad and Tobago take place as signatories to the Nuclear Non-Proliferation Treaty (NPT) are wrapping up their five-yearly review conference in New York.

“The CTBT, which makes no distinction between States with nuclear weapons or without them, is a bridge builder within the non-proliferation and disarmament regime,” said Mr. Tóth. “The impressive commitment to the CTBT can build confidence globally and regionally.”

♦ Receive daily updates directly in your inbox - Subscribe here to a topic.
♦ Download the UN News app for your iOS or Android devices.
CTBT 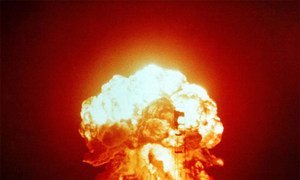 Indonesia has announced that it intends to ratify the United Nations-backed treaty banning nuclear testing, pushing the pact one step closer to fruition.