The simmering tensions and continued instability in both the Horn of Africa and the Democratic Republic of the Congo (DRC) were under the spotlight today as the Security Council met to discuss peace and security on the continent.

Ambassador Gérard Araud of France, who led a three-day Council mission to the DRC that concluded on Saturday, briefed the meeting on the trip and the latest developments in the vast country, where the future of a United Nations peacekeeping mission is under review.

The mandate of the mission (MONUC) – which began operations in 1999 – is due to expire at the end of this month.

Mr. Araud told the meeting that the Council delegation met with DRC President Joseph Kabila, other Congolese leaders and representatives of civil society groups as part of a listening tour designed to facilitate more dialogue between Kinshasa and the UN on the future of MONUC.

Any decision on MONUC’s future presence must take into account the situation on the ground so as to prevent new outbreaks of instability, he stressed, noting that security sector reform is a particular priority.

While the DRC has made progress on several fronts, conditions in the country remain fragile, with the humanitarian and human rights situations especially worrying.

Secretary-General Ban Ki-moon recommended in his latest report on the mission that its 20,000-strong force begin a drawdown of troops by 30 June. The Government has proposed a total withdrawal of the peacekeeping forces by 30 August 2011.

Somalia remains engulfed by one of the world’s worst humanitarian crises, with millions of people either internally displaced or living as refugees in neighbouring countries as Government forces fight Islamist rebels. Tensions are also high in the ongoing border dispute between Djibouti and Eritrea that flared in 2008.

Mr. Guelleh warned the Council that “the escalating tensions and conflicts, the breakdown of law and order so widespread in the Horn of Africa, could be but a prelude to a much worse situation unless its many causes are sufficiently and seriously addressed.”

The debate included discussions over the Horn of Africa’s chronic drought, high food and fuel prices, the impact of climate change, economic development and the problems caused by piracy. 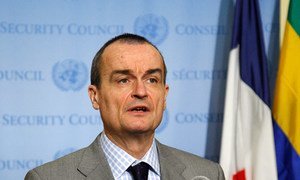 Back from DR Congo, Security Council set to review mandate of UN force

Members of the Security Council have wrapped up what they called an “extremely intense” listening tour in the Democratic Republic of the Congo (DRC) to study options for the future of the United Nations mission there, whose mandate expires at the end of the month.