Secretary-General Ban Ki-moon has stressed the important role played by universities around the world in shaping the next generation of global leaders, and the impact of education on efforts to achieve peace and sustainable development.

“Collectively, you represent the world’s higher education leadership, influencing the lives of millions of young people around the globe,” Mr. Ban said in a message for the 15th Triennial Conference of the International Association of University Presidents, which began today in Viña del Mar, Chile.

“Colleges and universities prepare the agents of change — the business, political, social and artistic leaders who define and build economies, societies and cultures,” he stated. “Your work addresses, in many ways, the future of our world; and your challenge is, indeed, to educate the next generation of world leaders.”

But it is not just future leaders that are shaped by the world’s universities, the Secretary-General noted.

The present generation of world leaders also stand to benefit from “the energy, research, scholarship and imagination” which institutions of higher education command.

This is why Mr. Ban has entrusted the United Nations Department of Public Information (DPI) with developing an initiative known as the “Academic Impact,” aimed at building stronger ties with institutions of higher learning. 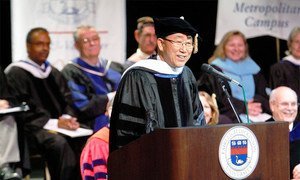 In an ever increasingly interdependent world, where challenges such as climate change, development and security transcend national boundaries, it is in everyone’s best interest to think globally, Secretary-General Ban Ki-moon told students at Fairleigh Dickinson University, where the United Nations chief received an honorary degree today.