UN News/Nam Cho
Tijjani Muhammad-Bande speaks to UN News before taking up his duties as President of the 74th session of the General Assembly. (September 2019)

Back in June, Nigeria’s Permanent Representative to the United Nations, Tijjani Muhammad-Bande, was elected by acclamation to preside over the 74th session of the General Assembly, which kicks off in New York in just over a week.

The new General Assembly President has had an outstanding academic career in political science, in which he received a B.Sc from Ahmadu Bello University, Nigeria, an MA from Boston University in the United States, and a Ph.D from the University of Toronto, Canada.

He has been the recipient of many awards and honours,  most notably, Nigeria’s Officer of the Order of the Federal Republic (OFR); one of his homeland's highest honours.

On the upcoming 75th anniversary celebration of the UN’s founding, he said there was a need to mark this important event “in the history of the Organization and of the world, and of politics in general. “It should remind us as to the purposes of the Organization, its limitation and its promise and this promise is what we should all keep in mind.”

UN News began by asking him to outline his main priorities:

GA President: My three main priorities, aside from the normal priorities of all Presidents of the UN General Assembly - aside from peace and security, which is fundamental - the three other ones are, poverty eradication, quality education, and inclusion.

UN News: You had mentioned in your election speech that you would work for the world's most vulnerable and you mentioned poverty eradication and education. Can you give us an idea of how you intend to go about these priorities? Any concrete initiatives?

The whole idea is that all Members are able to help others at times by showing what they have done, which has worked, which has not worked, and what support they are able to give to others on a short-term basis.GA President: There have been a lot of initiatives over a long period of time concerning methods and norms, concerning the eradication of poverty and the connections between poverty and many other afflictions. And I think (it’s important to work with) Member States to look at those things, and see what within those parameters they're able to work with others to achieve.

So, it is a whole range of things that can happen if we are able to listen to each other in terms of our needs and our ability to work together in solving or mitigating some problems.

UN News: You will become President of the General Assembly during a time of great distrust between nations. How will you bring them together on the world stage?

GA President: Well, first (we must) keep reminding ourselves why this Organization was established in the first place.

In terms of the whole notion that as representatives of Members States, we should show respect to others, because they are here, because they are also members and they have a voice. They have things to say, which we must listen to.

And it is only through this approach that we're able to achieve results.

UN News: You've spoken about improving how things are done at the UN. What are some of the ideas that you would like to implement?

GA President: It's simply to go back to some of the discussion, which is all over the place concerning how various organs are able to coordinate their work to reduce overlap, to also learn from what others are doing and reduce the overlap in terms of cost.  Let us say that in the next five years, it's a different kind of conversation we should be having concerning synergy, concerning (our) ability to join efforts to achieve results.

UN News: Your mandate coincides with the historic moment, the UN's 75th anniversary. What are your thoughts on the UN's work and, and its future?

GA President: It has had also a very good basis from its beginning. We have had a few areas in which we didn't do as well concerning, for example, genocide in Rwanda. There are many other areas in which, for example, norms concerning health issues and pandemics, issues relating to agriculture, issues relating to counter-terrorism, there is an emergent view, and, some constraints concerning the need not only to work together, but also (take) action on the ground on these matters.

There's a lot of excitement around the system and outside the United Nations itself concerning the need to mark this 75th anniversary as important in the history of the Organization and of the world and of politics in general.

It should remind us as to the purposes of the Organization, its limitation and its promise and this promise is what we should all keep in mind.

UN News: Do you think it's an occasion to celebrate multilateralism and what it has accomplished?

GA President: Oh, it is a celebration – to celebrate multilateralism and also to look at forces that hinder our full achievement of multilateral approaches to solving some of the problems.

UN News: Do you have any plans for improving gender parity at the UN?

GA President: I think the improvement is really in implementing what we've agreed to, that is to restate and to also act in a concerted manner to see that no one is left behind regardless of gender or race or religion. All elements offered, representations are important - gender certainly, given the equality of men and women in terms of numbers as well. So this is really crucial and the United Nations has shown a lead in this. It has its issues, but you have seen efforts that are very determined…And of course, during the Presidency of 74th (session), we have the opportunity also of dealing with Beijing+25. It gives us another platform to reflect further and see whether we're able to find, even more effective means of ensuring gender equality.

UN News: I'm going to go back to your second priority. You mentioned education; can you tell us why it's so important for you and how it translates on the ground? Its impact?

UN News: Finally, what would you like your legacy to be in September 2020?

GA President: Well, I think I would not want to give a broad view of what to do other than to say that we would want to know that as a team, and part of a team, we have pushed those matters of importance to the world, in a fair and transparent manner. And that whoever comes after us will find it easier to address some of these issues going forward.

INTERVIEW: The top diplomat shepherding the General Assembly through its 75th year 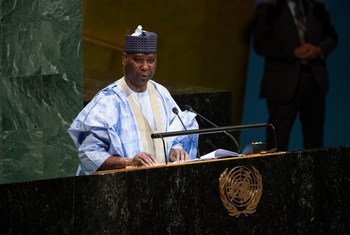