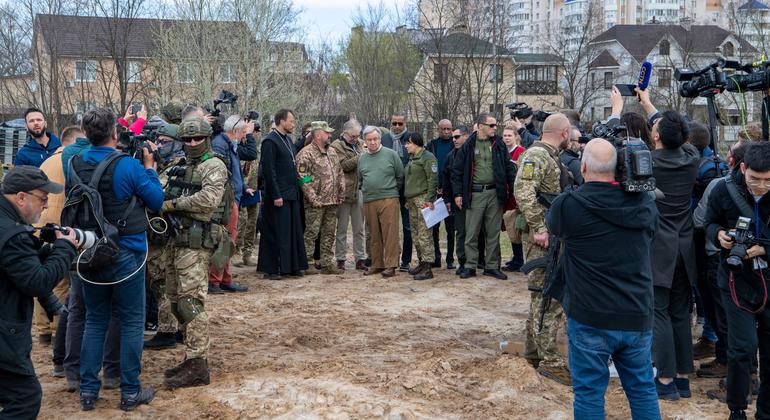 UN Photo/Eskinder Debebe
Despite the encouraging developments on grain and fertilizers, we remain deeply concerned about the lack of prospects for a shift towards a meaningful resumption of diplomatic efforts to end the war. Escalatory rhetoric from any side, including about expanding the conflict geographically or denying Ukraine’s statehood, is not consistent with the constructive spirit demonstrated in Istanbul.

Under-Secretary-General for Political and Peacebuilding Affairs Rosemary DiCarlo in remarks to the Security Council, 29 July '22

Get latest UN News on Ukraine

The horrific war in Ukraine has led to a large-scale humanitarian and refugee crisis. The Global Crisis Response Group Task Team is issuing a series of reports, which can be found here, on the global impact of the war on food, energy and finance systems.

The first commercial ship leaving the port of Odesa since February has sailed for Lebanon, carrying 26,527 tonnes of corn.

This is an achievement of the Joint Coordination Centre under @UN auspices, comprised of representatives of Ukraine, the Russian Federation & Türkiye. pic.twitter.com/zQmR0lKmHK

The security situation in Ukraine deteriorated rapidly following the launch of a Russian Federation military offensive on 24 February 2022. The armed violence escalated in at least eight oblasts (regions), including Kyivska oblast and the capital city of Kyiv, as well as in the eastern oblasts Donetsk and Luhansk which were already affected by conflict.

The escalation of conflict has triggered an immediate and steep rise in humanitarian needs as essential supplies and services are disrupted and civilians flee the fighting. The UN estimates that 12 million people inside Ukraine will need relief and protection, while more than 4 million Ukrainian refugees may need protection and assistance in neighbouring countries in the coming months.

On 1 March 2022, the UN and humanitarian partners launched coordinated Flash Appeals  for a combined $1.7 billion to urgently deliver humanitarian support to people in Ukraine and refugees in neighbouring countries.

Within Ukraine, the plan requires $1.1 billion to meet the escalating humanitarian needs of more than six million people affected and displaced by military operations over the next three months. Outside the country, the UN requested $551 million to help Ukrainians who have fled across borders, principally to Poland, Hungary, Romania and Moldova.

Amin Awad, the UN Crisis Coordinator for Ukraine called for an "immediate humanitarian pause" , on 5 March, in the fighting between Russian and Ukrainian forces, as UN aid supplies continue to arrive in the country.

Information about the UN Country Team in Ukraine can be found here.

The M/V Razoni sails from the port of Odesa following the authorization of the Joint Coordination Centre (JCC), established under the Black Sea Grain Initiative. OCHA/Saviano Abreu

The UN chief on Monday welcomed the departure of the first ship from the Ukrainian port of Odesa, carrying grain under the landmark deal signed by Ukraine, Russia and Türkiye, overseen by the UN.

The Razoni, carrying a cargo of 26,527 tonnes of corn, is the first cargo ship to leave a Ukrainian Black Sea port since 26 February, just a few days after the Russian invasion began. It is bound for the Mediterranean port of Tripoli, in Lebanon.

The deal dubbed a “beacon of hope” by Mr. Guterres when it was signed in the Turkish city of Istanbul on 22 July, is a “collective achievement” of the newly-established Joint Coordination Centre, or JCC, set up in Istanbul, under the auspices of the UN, by representatives from the three governments who inked the deal, known officially as the Black Sea Grain Initiative. 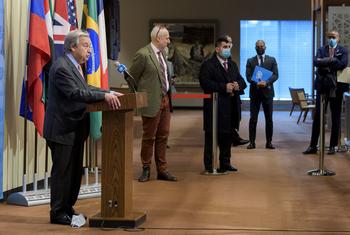 The message of the General Assembly is loud and clear:  End hostilities in Ukraine — now. Silence the guns — now. Open the door to dialogue and diplomacy — now.

We don’t have a moment to lose. The brutal effects of the conflict are plain to see. But as bad as the situation is for the people in Ukraine right now, it threatens to get much, much worse. The ticking clock is a time bomb.

The world wants an end to the tremendous human suffering in Ukraine. This same truth was clear in the rapid mobilization of funds for our lifesaving humanitarian operations in Ukraine and neighbouring countries.  Our global flash appeal was met with record generosity.

Looking ahead, I will continue to do everything in my power to contribute to an immediate cessation of hostilities and urgent negotiations for peace. People in Ukraine desperately need peace. And people around the world demand it. Read full remarks

Latest statements by the Secretary-General and his spokesperson » 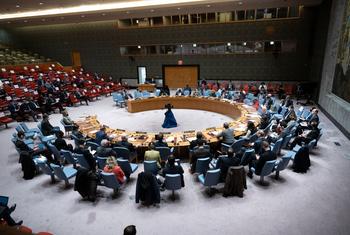 On the 31 January 2022, the Security Council met at the request of the United States over the reported Russian deployment of more than 100,000 troops and war logistics on the Russian-Ukrainian border.

On Monday 21 February, the Council held an emergency meeting, at the request of the delegate of Ukraine over the decision of the Russian Federation to recognise parts of Ukraine’s Donetsk and Luhansk regions as independent entities. UN political chief Rosemary DiCarlo, in her briefing the Council raised concerns over the use of the phrase “peacekeeping mission” by the Russian Federation and also warned of the risks with regionals and global repercussions.

That emergency session was followed by three more on 23rd, 25th and 27th February.  Secretary-General Antonio Guterres, in a brief statement during the late-night session on 23rd February strongly urged the Russian President to stop his troops from attacking Ukraine invasion.  But within minutes of this call, and during the meeting, news reports emerged that the Russian Federation had launched a ‘special military operation’ into Ukraine.  Several Council delegates condemned the development.

Late on Friday, 25 February, in response to Russia’s attack, the Council met again to vote on a resolution prepared by the US and Albania, with the support of several other Member States, that would have deplored “Russia’s aggression” and called on Moscow to pull back all its troops.  Eleven members voted in favour of the resolution, and three (China, India, and United Arab Emirates) abstained, but Russia, which was at that time holding the Council’s presidency for the month, vetoed the text.

On Sunday, 27 February, for the fourth time within a week, the Council met in an emergency session and adopted a procedural measure – known informally as ‘Uniting for peace’ – calling on the 193-member UN General Assembly to urgently take up a text that would demand an end to the Russian military operation in Ukraine.

UN News of the Security Council on Ukraine 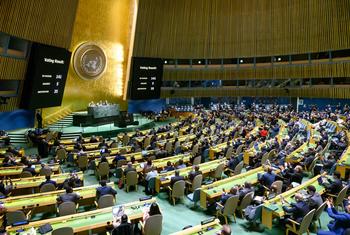 As the situation in the region continued to deteriorate following the subsequent launch of Russia’s military offensive, Russia vetoed on 26 February a move in the Security Council to condemn and halt its aggressions against Ukraine. A ‘no’ vote by any of the Council’s permanent members, which along with Russia, include China, France, United Kingdom and the United States, means the measure will not be upheld.

At the end of that meeting in the Council, Ukraine and several other delegates pledged to take a similar resolution to the 193-member General Assembly where it could not be subjected to a veto.

On Sunday, 27 February, the Security Council met in an emergency session and adopted a procedural measure – known informally as ‘Uniting for peace’ – calling on the General Assembly to convene an emergency special session to act on a text that would demand an end to the Russian military operation in Ukraine.

Under the Uniting for Peace formula, the Assembly has the power to act “if the Security Council, because of lack of unanimity of the permanent members, fails to exercise its primary responsibility to act as required to maintain international peace and security”.

The Assembly convened its 11th special emergency special session on 1 March and after a day of interventions by the wider UN membership, overwhelmingly adopted a resolution on 2 March demanding that Russia immediately end its military operations in Ukraine.

A total of 141 countries voted in favour of the resolution, which also reaffirmed Ukrainian sovereignty, independence and territorial integrity.