2 April 2014
Stating that the world failed to stop the Central African Republic’s slide “into a grave political, economic and humanitarian crisis,” United Nations Secretary-General Ban Ki-moon today urged African and European leaders meeting in Brussels to act quickly to end the killing, protect civilians and prevent further sectarian strife, including through the deployment of a UN peacekeeping force.

Stating that the world failed to stop the Central African Republic’s slide “into a grave political, economic and humanitarian crisis,” United Nations Secretary-General Ban Ki-moon today urged African and European leaders meeting in Brussels to act quickly to end the killing, protect civilians and prevent further inter-communal strife, including through the deployment of a UN peacekeeping force.

“We have not made the difference that we promised we would make – to prevent the preventable,” Mr. Ban told the High-Level Meeting of the European Union (EU) and African Union (AU) on the crisis in the Central African Republic (CAR).

He noted that after a year of largely continuous violence, the situation in the country remains “highly volatile” with the people suffering “grave deplorable atrocities” and in desperate need of assistance.

Mr. Ban has been at the EU headquarters in Brussels since yesterday, holding a series of meetings with political leaders on a host of issues. At today’s CAR-focused talks, he said the people of the crisis-torn country need support in a number of critical areas and that the international community has a collective responsibility to respond.

More than 650,000 people are still internally displaced, and over 290,000 have fled to neighbouring countries in search of refuge from the conflict, which has taken on increasingly sectarian overtones.

On the current security situation, Mr. Ban said that killings, targeted attacks and other atrocious human rights violations continue in a context of total impunity. Genocide was avoided in large measure because of the mass exodus of minorities to areas where they felt they were safe – with their own people.

Commending the AU-led peacekeepers (MISCA) and the French peacekeeping operation known as Sangaris for their efforts to restore peace and security, he warned: “They are under-resourced and overwhelmed. Reinforcements are needed right away.”

The next priority for the international community is to provide assistance to the CAR’s Transitional Government, which needs help in getting police, judges, prison guards and others back on the job.

The Head of State of the Transition, President Catherine Samba-Panza, is committed to restoring State authority, Mr. Ban noted. “But with no budget, her abilities are sharply constrained. Funding for humanitarian aid is also falling short of the amounts needed and of pledges made, with only 20 per cent of the resources received,” he added.

The final priority action area will be to ensure an inclusive political process. “Community and religious leaders have an important role to play. The people of the CAR must see that accountability applies to all – that the rule of law matters no matter who they are or what they believe, from leaders to individual combatants,” declared the UN chief.

While the international community had not made the difference that it had promised, “today, with even modest support, we have the opportunity to reverse course and help ensure that the people of the CAR can enjoy the fruits of their country’s natural riches and re-establish the coexistence that has been their proud history,” said Mr. Ban.

Speaking on the sidelines of the meeting following his talks with European Commission President José Manuel Barroso, the Secretary-General recalled the recommendations he presented last month to the UN Security Council to transform MISCA into a UN peacekeeping operation.

“But this will take time. Meanwhile, I have a plan to address immediate needs,” Mr. Ban told the press, pledging to do everything possible to improve the international response towards ending the violence. “We also need to get more aid through,” he pleaded, adding that there is hope for the people of CAR to stabilize, rebuild and develop their country, provided they receive the necessary help.

Answering a reporter’s question on the scope of the recommended UN peacekeeping force for CAR, the Secretary-General said: “I have recommended that at least, we need to have 10,000 military personnel, 1,800 police officers and 20 correctional officers. This is within 12,000 altogether. I hope the Security Council will approve my recommendation as soon as possible. My expectation is that the Security Council may take action early next week.”

Mr. Ban expressed appreciation to several European countries, such as Denmark and Finland, who have generously offered to provide additional financial support to help pay the salaries of CAR Government officials, as well as to the EU for its $30 million to help with institution building.

During their meeting, Mr. Barroso and Mr. Ban also reviewed developments in Mali, the broader Sahel, the Africa’s Great Lakes region, and discussed global challenges, such as climate change.

“I fully support the visionary commitment of the European Union to reduce by 40 per cent greenhouse gases by 2030. I hope the European Union will lead this campaign and agree on this vision at the forthcoming June summit meeting so that they can come with a very ambitious target to the climate change meeting that I am going to convene on September 23 this year,” the UN chief said, adding that the EU’s leadership is needed on this matter. 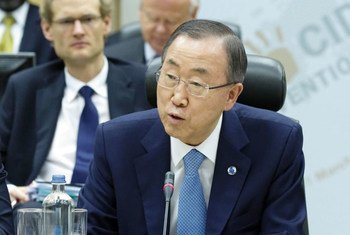 1 April 2014
Addressing the International Conference on Genocide Prevention in Brussels, United Nations Secretary-General Ban Ki-moon today declared that defending human rights is a global responsibility, and called on all Governments to renew their commitment to vigilance and political will to prevent any mass atrocities from ever occurring again.