Pinchas Gutter is from Łódź, Poland, where he enjoyed a very happy childhood before the Second World War. He survived six different Nazi concentration camps – a life forever changed by the traumatic events of the Holocaust.

The worst moment of all, was when he lost his father, mother, and sister on the same day, murdered by the Nazis.

In this powerful and moving interview marking this week of Holocaust Remembrance at the UN, he tells Nathan Beriro, that he turned “almost into a nothing”. Survivors, he says, “can’t ever run away from what they have lived”.

Auschwitz-Birkenau was liberated 76 years ago this week, and to mark Holocaust remembrance day in late January, the corridors of UN Headquarters are normally filled with the stories of survivors who come to bear witness.

But this year, the annual commemoration programme was held online for the first time ever, due to COVID-19, under the theme “Facing the Aftermath: Recovery and Reconstitution after the Holocaust”.

Putting pain eloquently on paper is just one of the gifts that has made Belgian-born Israeli cartoonist Michel Kichka a celebrated artist, but perhaps his most “overwhelming” and profound journey began when he put pen to paper and started work on a graphic novel examining the impact of his own father’s trauma surviving the Nazi death camp at Auschwitz.

She describes herself as “only an ordinary woman”, but Eva Lavi made an extraordinary contribution inside the UN’s General Assembly Hall in January, fulfilling what she said was her God-given destiny, to bear witness to the evil of the Holocaust.

Ms. Lavi is the youngest survivor to be saved from the Nazis by the German industrialist Oskar Schindler — just a little girl when she was added to “Schindler’s List”.

Before reaching the relatively safe-haven of his factory in Czechoslovakia, she survived the horrors of the gas chambers in Auschwitz. 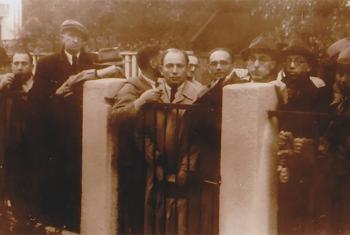 A Japanese diplomat who rescued 6,000 Jewish families fleeing Nazi persecution in Lithuania showed how one person can make a difference, Cellin Gluck, the Director of a movie entitled "Persona Non Grata" has said.

Recently screened at the UN, the film tells the story of how Chiune Sugihara disobeyed his Government during the Second World War and issued visas to these refugees.