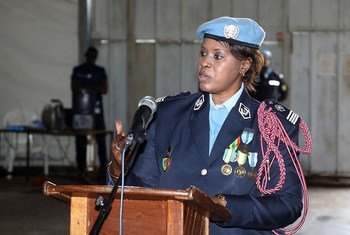 ‘What a man can do, a woman can do better’: UN Female Police Officer of the Year

Deployed with the UN Stabilization Mission (MONUSCO) in the Democratic Republic of the Congo, since March 2017, after serving in Darfur and Mali, UN Police Officer (UNPOL) Seynabou Diouf from Senegal, helps empower women and survivors of sexual violence across the region. On Tuesday, she received the 2019 United Nations Female Police Officer of the Year Award at UN Headquarters in New York. Speaking before the ceremony, Major Diouf told UN News’s Pascal Sim, that it’s essential to have more women serving UN Peacekeeping, and that “what a man can do, a woman can do better”.