Cambodia is poised to make strides towards the full social integration of gay, bisexual, and transgender (LGBT) people, protecting them from violence and discrimination, a UN-appointed independent human rights experts said on Friday.

In presenting his conclusions at the end of a 10-day visit to Phnom Penh, Siem Reap and Battambang, the UN independent expert on protection against violence and discrimination based on sexual orientation and gender identity, Victor Madrigal-Borloz, urged authorities to legally recognize LGBT families.

“Without exception, State agents with whom I held conversations acknowledged that diversity in sexual orientation and gender identity was a trait inherent to humankind, and that all Cambodian citizens, including members of the LGBT community, were valued members of society who have the right to live in freedom and equality”, he said.

The UN expert met with State representatives at national and provincial levels, civil society organizations and over 100 LGBT persons who shared their life experiences with him.

“Before and during my visit I did not receive any information of massive or systematic physical violence against the people with whom I spoke, or persons known by them”, he stated.

Mr. Madrigal-Borloz also noted that Cambodia does not have legislation explicitly criminalizing sexual orientation or gender identity, which gives him “an encouraging point of departure”.

Based on the evidence presented to him, the UN expert concluded that violence and discrimination against LGBT persons originate in the family sphere, and spills over to life in school, the workplace, and also when accessing health services.

A lack of data, however, creates great challenges in analyzing the challenges facing LGBT persons, and the design and implementation of measures to address them.

Mr. Madrigal-Borloz in his statement, recommended adopting a series of measures, including more surveys and data collection, and highlighted as indispensable that concerned communities and civil society organizations fully participate in the design, implementation, and evaluation of public policy.

The testimonies he received highlighted that in the Cambodian context, local communities identified legal recognition of their families as the key.

This bears specific relation to deeply cherished values that reinforce family bonds and intergenerational respect and solidarity as part of the recognition of self-worth and social responsibility.

“I encourage the State to make swift progress on this agenda”, he said, “advanced by Cambodian communities with clear point of reference in the realities of their lives and needs”.

Independent experts are appointed by the Geneva-based UN Human Rights Council to examine and report back on a specific human rights theme or a country situation. The positions are honorary and the experts are not paid for their work. 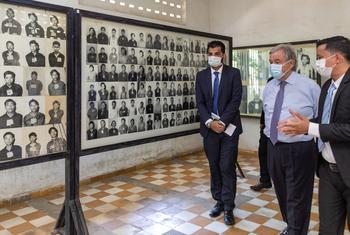 Cambodia: In visit to genocide museum, UN chief warns of the dangers of hate and persecution

Preserving the memory of people who suffered and died during the Khmer Rouge's rule in Cambodia helps to ensure such atrocities are never repeated, UN Secretary-General António Guterres said in the country’s capital, Phnom Penh, on Sunday. 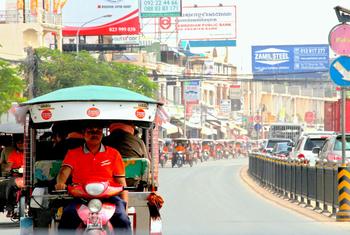 An expert on the human rights situation in Cambodia has issued a 10-point agenda for the authorities which calls for opening up political space and paving the way for democratic reform.