Barring girls and young women from classrooms in Afghanistan could wipe out huge gains made in education and create “a lost generation”, the UN’s educational and cultural organization, UNESCO, has warned.

The agency announced on Thursday that it was dedicating the International Day of Education on 24 January, to the country’s women and girls.

“No country in the world should bar women and girls from receiving an education. Education is a universal human right that must be respected,” said Director-General Audrey Azoulay.

“The international community has the responsibility to ensure that the rights of Afghan girls and women are restored without delay. The war against women must stop,” she added.

Fears of a ‘lost generation’

This followed an earlier directive prohibiting girls from attending secondary school, issued mere months after the fundamentalist group, who ruled in the late 1990s up to 2001, regained power in August 2021, sweeping back into the capital, Kabul.

As a result, Afghanistan is the only country in the world where women and girls’ access to education has been suspended.

“The country risks a lost generation as educated women are essential for its development,” UNESCO said earlier this week.

“Afghanistan – or any other country – cannot advance if half of its population is not allowed to pursue an education and participate in public life.”

Between 2001 and 2018, Afghanistan recorded a tenfold increase in enrollment across all education levels, from roughly one million to 10 million students, according to UNESCO.

The number of girls in primary school increased from almost zero to 2.5 million.  By August 2021, they accounted for four out of 10 primary school students.

Today, 80 per cent of school-aged Afghan girls and women, 2.5 million, are out of school.  The order suspending university education for women, announced in December, affects more than 100,000 attending government and private institutions.

UNESCO is calling for immediate and non-negotiable access to education and a return to school for all girls and young women in Afghanistan.

“Everyone has the right to education. Everybody. But in Afghanistan, girls and women have been deprived of this fundamental right,” said the agency.

During the past two decades, UNESCO has supported the Afghan education system, including through running a literacy programme that reached over 600,000 young people and adults, 60 per cent of them women.

Since the Taliban takeover, it has shifted activities to ensure continuity of education through community-based literacy and skills development classes for over 25,000 young people and adults in 20 provinces.

An advocacy campaign reached over 20 million Afghans to increase public awareness of the right to education for youth and adults, especially young girls and women.

UNESCO is also working on an initiative to ensure reliable education data so that partners can direct funding to meet the most critical outstanding needs. 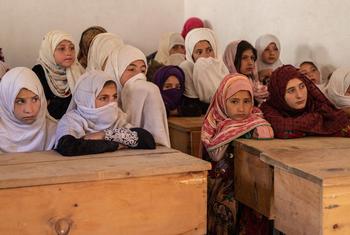 Unity in Security Council essential, in face of Taliban rights violations against women and girls

The UN Security Council must be unified in opposing Taliban policies to erode the fundamental human rights of women and girls in Afghanistan, the UN’s Special Representative there said on Friday.