OCHA/Otto Bakano
A family go in search of water in Burkina Faso where more than 950,000 people are severely food insecure, notably in the conflict-hit northern regions.

Some 50 women and girls in Burkina Faso who were abducted last week while looking for food must be released immediately, the United Nations said on Tuesday.

Unidentified armed groups reportedly kidnapped the women and girls on Thursday and Friday near the town of Arbinda, located in the north.

“The Secretary-General calls for the immediate and unconditional release of the abducted women and girls and for their safe return to their families,” UN Deputy Spokesperson Farhan Haq said in a statement.

Mr. Guterres urged the authorities to "spare no efforts in bringing those responsible for this crime to justice."

He also underlined the UN’s commitment to continue working with the West African country, and international partners, including to enhance the protection of civilians and support efforts towards lasting peace.

The UN human rights chief, Volker Türk, has also called for the perpetrators to be held to account.

“I am alarmed that dozens of women out to search for food for their families were abducted in broad daylight, in what could be the first such attack deliberately targeting women in Burkina Faso,” he said in a statement on Monday.

Mr. Türk noted that Arbinda is one of many towns and villages in the north of the country that have been besieged by armed groups since early 2019.

This had made it extremely difficult for residents to have access to food, water and other basic goods and services.

“I call for the immediate and unconditional release of all the abducted women and for the national authorities to promptly conduct an effective, impartial and independent investigation to identify those responsible and hold them to account,” he said.

Earlier this month, the UN Security Council again heard how countries in West Africa and the Sahel continue to face multiple challenges, including “unprecedented” levels of insecurity.

Giovanie Biha, Officer-in-Charge of the UN Office for the region, UNOWAS, said activities by armed groups, violent extremists and criminal networks have forced the closure of thousands of schools and health centres, and displaced millions. 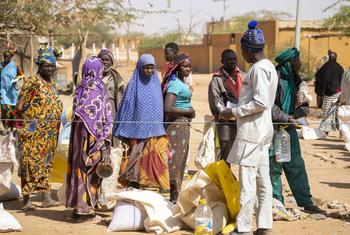 Although West Africa and the Sahel continues to face unprecedented security challenges, it is still “a land of immense opportunities”, a senior UN official told the Security Council on Tuesday.