Mahmoud Shamrouk /UNITAMS
Dr. Volker Perthes, the Special Representative of the UN Secretary General for Sudan and Head of the United Nations Integrated Transition Assistance Mission in Sudan (UNITAMS) during an interview with UN News.

More than a year after the military coup in Sudan, political parties began talks this month aimed at restoring a civilian-led transition, which the UN has hailed as an important step towards peace and democracy.

The coup ended a power-sharing agreement between military and civilian leaders established following the April 2019 overthrow of President Omar al-Bashir, who had ruled for 30 years.

The conference on the roadmap for the renewal of the dismantling of the 30/06 regime is over. It was the 1st of 5 issues identified in the Political Framework Agreement for further discussion. The Trilateral Mechanism will support the remaining events towards a final agreement. https://t.co/yXY6ka6rio

“After almost 15 months after the coup of 25 October 2021, returning to the transition path would be a major, major step forward for all Sudanese whether they are civilians or in the military,” said Volker Perthes, the UN Special Representative for Sudan, speaking recently to UN News.

The talks mark the second and final phase of a political process that began in December with the signing of a Political Framework Agreement for a two-year transition leading to elections.

They are being facilitated by the UN, the African Union (AU) and the East African bloc IGAD, together known as the Tripartite Mechanism.

In a statement issued following the 8 January launch in the capital, Khartoum, UN Secretary-General António Guterres described the development as “another important step forward towards realizing the aspirations of the Sudanese people for democracy, peace and sustainable development.”

Representatives from civil society, academia, the private sector, youth, and women rights groups, as well as traditional and religious leaders, are also taking part in the talks.

Five workshops will be held, the first of which focused on a road map for the dismantling of the old regime, said Mr. Perthes, who also heads the UN Integrated Transition Assistance Mission in Sudan (UNITAMS).

“I was able to witness quite a number of sessions, some meetings and workshops, and I was personally impressed by the level of discussions and sincerity with which the Sudanese talked to one another, interacted with one another,” he continued.  “It was very result-oriented, and that is important in this context.”

Last month, the envoy briefed the UN Security Council on the framework agreement, saying it could signal a way out of the uncertainty and insecurity sparked by the coup.

Some factions have criticized the deal for neglecting issues such as accountability, but Mr. Perthes refuted these claims.

“Accountability is being mentioned in the framework agreement, but it is true that it needs to be spelled out further,” he said.

“There will be a workshop - probably one of the most important of the five workshops - on transitional justice, which of course is about accountability and how to practice it in a difficult context,” he added.

In a better place now

With the talks underway, Mr. Perthes was asked about the next steps, expressing hope for the future.

“I am more optimistic, much more optimistic than I was a year ago,” he revealed.  “I think there is a real chance to get to a political solution, which of course means that a government has to be formed very, very soon.”

He also urged the Sudanese people not to lose hope.  “We are in a better place than we were a year ago and support those who try to find a solution. No solution is ideal, but having a solution is better than having none.” 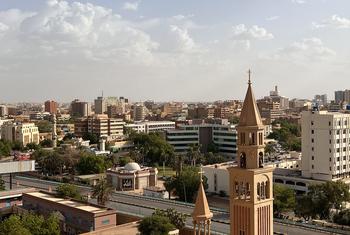 UN Secretary-General António Guterres has welcomed the launch of the final phase in the political process towards restoring a civilian-led transition in Sudan, more than one year after the military coup, his Spokesperson said on Monday.