The UN chief said on Monday he was determined to make 2023 “a year for peace” and a “year for action”, highlighting the need for practical solutions to a raft of pressing problems facing all regions of the world.

“We owe it to people to find solutions, to fight back, and to act”, said Secretary-General António Guterres. “At times, discreetly but always with determination, we will fight back.”

.@antonioguterres tells journalists: I end this year with one overriding conviction: This is not a time to sit on the sidelines, it is a time for resolve, determination, and – yes – even hope. https://t.co/auNRLb6jc0

Building on his general call to action, Mr. Guterres announced that he would convene a Climate Ambition Summit next September, and called on every leader to “step up – from governments, business, cities and regions, civil society and finance.”

Time to ‘move the needle’

Nothing less than tangible and credible climate action would do, but dispensing with diplomatic niceties, he made it clear that the price of entry for every nation, was “non-negotiable credible, serious and new climate action and nature-based solutions that will move the needle forward and respond to the urgency of the climate crisis.”

He said it would be “a no-nonsense summit. No exceptions. No compromises. There will be no room for back-sliders, greenwashers, blame-shifters or repackaging of announcements of previous years.”

The UN chief said it would be convened alongside a General Assembly opening-week summit already in the calendar, designed to accelerate action at the halfway point towards the ambitious Sustainable Development Goals (SDGs).

He began his end of year press conference at UN Headquarters by looking back at 2022, saying that although there may be “plenty of reasons for despair”, amid the Ukraine war, and associated cost-of-living crisis leaving the poorest nations on “debt row”, that was not an option.

“This is not a time to sit on the sidelines, it is a time for resolve, determination, and – yes – even hope.

“Because despite the limitations and long odds, we are working to push back against despair, to fight back against disillusion and to find real solutions. Not perfect solutions – not even always pretty solutions – but practical solutions that are making a meaningful difference to people’s lives.

“Solutions that must put us on a pathway to a better, and more peaceful future.”

Photo: CBD
The 15th or COP15 session of the UN Convention on Biodiversity CBD, Montreal, Canada.

He highlighted the deal just hours earlier, to halt the destruction of ecosystems worldwide, at the UN’s Biodiversity Conference, COP15.

“We are finally starting to form a peace pact, with nature”, he said, urging all countries to deliver on their promises.

Progress has been made on ending conflict in some of the world’s warzones, he said, pointing to the cessation of hostilities in northern Ethiopia, as another “reason for hope”, a by-product of “a rebirth of diplomacy.”

There’s been progress in eastern Democratic Republic of Congo too, where armed groups have intensified the fight against Government troops, drawing in UN peacekeeping forces, and “a truce in Yemen has delivered real dividends for people”.

Even in the brutal theatre of war that is Ukraine, “we have seen the power of determined, discreet diplomacy to help people and tackle unprecedented levels of global food insecurity”, he said, citing his Black Sea Grain initiative to facilitate exports of food and fertilizers from Ukraine, and the Memorandum of Understanding for unimpeded exports of Russian food and fertilizers.

More than 14 million metric tons of grain and other foodstuffs have now been shipped from Black Sea ports, while Russian wheat exports have tripled under the Initiative.

“But much work remains to be done”, he cautioned. “Food prices are still too high and access to fertilizers still too limited.”

Despite pledges made at COP27 in Egypt and the biodiversity deal, it is clear that overall, the battle to limit emissions to just a 1.5 degree increase above pre-industrial levels, is still “moving in the wrong direction”, with the global emissions gap is growing.

“The 1.5 degree goal is gasping for breath. National climate plans are falling woefully short. And yet, we are not retreating. We are fighting back”, added the UN chief.

He said the international community was now “fighting back to restore trust between North and South”, with a deal over the long-stalled issued of Loss and Damage, at COP27.

Another positive step was taken during 2022 with the launch of an action plan to cover every person in the world with early warning systems, within the next five years.

“Going forward, I will keep pushing for a Climate Solidarity Pact, in which all big emitters make an extra effort to reduce emissions this decade in line with the 1.5-degree goal and ensure support for those who need it.

Without it, he warned, “the 1.5 degree goal will soon disappear. I have pulled no punches on the imperative for all of us to confront this existential threat. And I will not relent.” 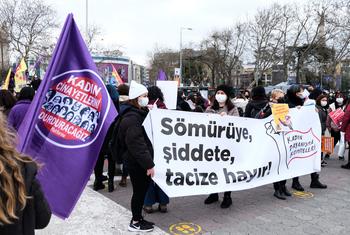 Today’s “trying times” highlight the need for a recommitment to human rights, which are central to solving global problems, UN Secretary-General Antonio Guterres said in his message for Human Rights Day on Saturday. 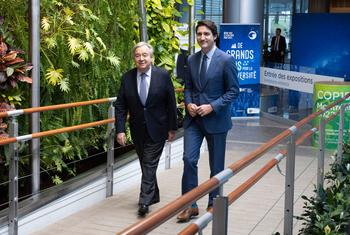