Secretary-General António Guterres “strongly condemns” an attack against a UN police patrol in northern Mali that claimed the lives of two Nigerian peacekeepers, according to his spokesperson.

In a statement issued on Friday, Stéphane Dujarric said that in addition to the deaths of the male and female peacekeepers in Timbuktu town earlier in the day, four other blue helmets from the UN Multidimensional Integrated Stabilization Mission in Mali (MINUSMA) were injured.

Secretary-General @antonioguterres strongly condemns the attack perpetrated today against a @UN_MINUSMA police patrol in Timbuktu town in northern Mali, during which two Nigerian peacekeepers were killed, including one woman, and four others injured.

The UN chief called on the Malian authorities to “spare no effort in identifying and swiftly bringing the perpetrators of these heinous attacks to justice”.

He offered his deepest condolences to the bereaved families, the Government, and people of Nigeria and wished the injured a speedy recovery.

“The Secretary-General reiterates the United Nations continued support to, and solidarity with, the people of Mali”, said Mr. Dujarric.

At the same time, the Security Council issued a statement condemning the attack “in the strongest terms” and paid tribute to “all peacekeepers who risk their lives”.

They called on the Transitional Government of Mali to “swiftly investigate” the attack with the support of MINUSMA and promote accountability by bringing the perpetrators to justice.

The ambassadors reminded Mali officials to keep the relevant troop-contributing country informed of the progress consistent with the Security Council resolutions on the safety and security of peacekeepers (2518) and accountability for any violence against them (2589).

They underlined that involvement in planning, directing, sponsoring, or conducting attacks against MINUSMA peacekeepers “constitutes a basis for sanctions”.

UN Photo/Gema Cortes
A member of the Search and Detect Team serving with the UN Stabilization Mission in Mali surveys a road in Menaka in the northeast of Mali.

The responsibility of UN personnel safety rests with host States, the statement continued, highlighting the importance of communications between MINUSMA and Mali’s Transitional Government.

The Council reaffirmed that terrorism constitutes “one of the most serious threats to international peace and security”, describing it as “criminal and unjustifiable”, regardless of the motivation.

They emphasized the need to “bring perpetrators, organizers, financiers and sponsors of these reprehensible acts of terrorism to justice” and for all States to combat terrorism in accordance with the UN Charter and international law.

They urged the Malian parties to fully implement the Agreement on Peace and Reconciliation in Mali “without further delay”.

“Lasting peace and security in the Sahel region will not be achieved without a combination of political, security, peacebuilding and sustainable development efforts benefiting all regions of Mali, as well as the full, effective and inclusive implementation of the Agreement”, they said.

UN Photo/Harandane Dicko
Senegalese peacekeepers serving with MINUSMA secure the route that their convoy must travel on to Ogoussagou to ensure safety for its personnel.

The Council further stressed the importance of MINUSMA having the necessary capacities to fulfil its mandate and promote the safety and security of the blue helmets.

These “heinous acts” will not undermine the peacekeepers determination to continue to support the peace and reconciliation process in Mali, the statement concluded.

The day before the attacks, a new Group of Friends to Promote Accountability for Crimes Against Peacekeepers initiative was launched at UN Headquarters in New York to improve the safety and security of blue helmets.

During the event, peace operations chief Jean-Pierre Lacroix reminded that Mali was one of three countries that shouldered 84 per cent of peacekeeping fatalities since 2013.

He also drew attention to four MINUSMA personnel from Chad who were killed on 10 October as a result of improvised explosive device in Tessalit, the Kidal Region. 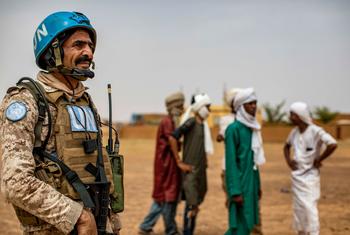 The situation in Mali continues to justify sustained international attention and engagement, the top UN official in the West African country told the Security Council on Tuesday.