The “climate of oppression” in Nicaragua has only intensified in recent months, UN High Commissioner for Human Rights, Volker Türk, said on Thursday.

Addressing the UN Human Rights Council in Geneva, Mr. Türk reported that the number of people arbitrarily detained - either for expressing their political views, or for being perceived as critics of the Government - rose from 195 in September to 225 today.

🇳🇮 UN Human Rights Chief @volker_turk urges #Nicaragua to include again those who have been excluded from the political &amp; social spheres so they can participate in public life. He calls on the int'l community to ensure sustained backing for civil society: https://t.co/R6MyD3lERx https://t.co/NJ4HtxoUq4

“This includes relatives of detained political opponents, allegedly to coerce the latter into surrendering,” he said.

These persons – 26 women and 199 men – are being held in precarious conditions, something which his predecessor, Michelle Bachelet, had noted.

He said more than 3,000 national and international non-governmental organizations have been shut down, almost half since September alone.

As a result, countless people are now without access to important services or assistance.

Additionally, a new law adopted in October requires registration and government authorization for the production, filming and exhibition of any audio-visual material.

“Some are prosecuted for the offences of conspiracy to undermine national integrity or for ‘false news’. All part of a systematised effort to stifle opposition and dissent.”

The lead up to, and holding of, municipal elections in November “had the trappings of an exercise in autocracy,” he said.

The months prior to the voting were marked by “a wave of arrests and dismissals of political opponents.”

Political parties that had their legal status revoked last year were also excluded from participating.

“After the elections, riot police reportedly repressed supporters of the indigenous political party YATAMA, who claimed having won in the municipality of Waspam, in the Northern Caribbean Coast. We were told that at least 19 people, mostly young indigenous people, were arrested and detained for several days.”

Meanwhile, the crisis continues to ripple beyond the country’s borders.

Between January and October of this year, Costa Rica received 70,000 new asylum applications from Nicaraguans, while more than 147,000 citizens showed up at the  United States border.

Nicaragua also continues to isolate itself from the international community.

The country has failed to engage with several UN human rights bodies and has not cooperated with the Inter-American system of human rights.

He urged the authorities to immediately release all persons who have been arbitrarily detained.

The High Commissioner also appealed for those who have been excluded from the political and social spheres, to be allowed to participate freely again in public life.

Mr. Türk emphasized that the fundamental freedoms of expression, association and assembly, must be respected.

“My Office is ready to work with the authorities in these areas, and I request access to the country for my staff,” he said.

The UN rights chief added that it is important for the international community to ensure sustained backing for Nicaragua’s civil society organisations, many of which continue to operate from exile. 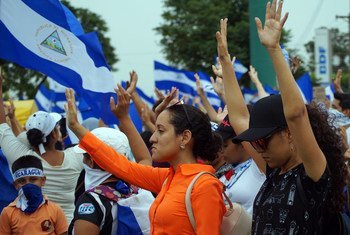 Nicaragua must comply with its international obligations to respect and guarantee fundamental freedoms, two experts appointed by the UN and the Inter-American Commission on Human Rights (IACHR) said in a joint declaration issued on Monday.