The United Kingdom should rewrite proposed legislation covering the 30-year conflict in Northern Ireland, known as the “Troubles”, because it fails to comply with the obligation to investigate serious violations and denies truth and remedy for the victims, two UN human rights experts said on Thursday.

The Northern Ireland Troubles (Legacy and Reconciliation) Bill was introduced in Parliament in May and passed a second reading in the House of Lords last month.

Further review is set to take place in January.

The UN experts are concerned that the Bill bans, and in some cases unduly restricts, conflict-related civil actions, coronial inquests, and police complaints into deaths, torture and other harmful conduct.

Instead, reviews will be undertaken by an Independent Commission for Reconciliation and Information Recovery (ICRIR).

“The Bill will substantially hamper victims’ access to remedy before criminal and civil courts for the serious human rights violations and abuses suffered. It would further preclude information recovery and reparations for those victims who have for decades struggled to get justice and redress for the harm endured,” the experts said in a statement.

More than 3,500 people were killed, and thousands more injured, during the Troubles, which began in the late 1960s.

Fighting between British forces and the Irish Republican Army (IRA), and other paramilitary groups across the Catholic-Protestant sectarian divide, effectively ended with the signing of the Good Friday Agreement in April 1998, led by the Government of Tony Blair and political leaders from all sides – including the Republic of Ireland.

The experts pointed out that the Troubles Bill offers conditional immunity to people participating in the ICRIR, including those accused of committing grave human rights violations.

“The immunity scheme envisaged in the Bill, particularly in view of the low threshold required for granting immunity and the lack of review mechanisms, would be tantamount to a de-facto amnesty scheme,” they said.

Furthermore, the Bill “appears to conflate reconciliation with impunity, as well as oppose legal accountability, an essential pillar of transitional justice processes, to truth, information recovery and reconciliation.”

The essential components of truth, justice, reparation, memorialisation and guarantees of non-recurrence, “cannot be traded off against one another in a ‘pick and choose’ exercise”, said the experts.

They urged the UK authorities to consider withdrawing the Bill and redrafting it to fully comply with international and regional human rights standards, in effective consultation with victims and civil society

If approved, the Bill would thwart victims’ right to truth and justice, undermine the rule of law, and the United Kingdom would be in flagrant contravention of its international human rights obligations, they said.

Moreover, it would breach the Good Friday Agreement, which could undermine the Troubles-related peace process and set a damaging and concerning example for other countries emerging from conflict.

They were appointed by the UN Human Rights Council, which is based in Geneva.

The experts are part of the Council’s Special Procedures mechanism to monitor and report on specific human rights situations or thematic issues.

They are not UN staff and are not paid for their work. 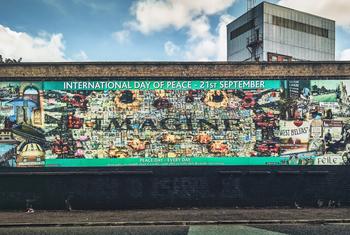 What independent UN human rights experts are describing as an ongoing smear campaign against a prominent Northern Irish academic and human rights lawyer, “has the potential to spark physical violence” they said on Thursday, amidst increasing polarization once more between nationalists and unionists, following the United Kingdom’s Brexit vote, and the resulting Northern Ireland protocol.