Iran removed from UN Commission on the Status of Women

UNICEF/Aslan Arfa
A girl wearing her hijab in Iran runs past a mural stating, in Persian, “God loves children who say their ‘namaz’ [prayers].” (File)

Iran removed from UN Commission on the Status of Women

The 54-member UN Economic and Social Council (ECOSOC) on Wednesday adopted a resolution to remove Iran from the Commission on the Status of Women (CSW) for the remainder of its four-year term ending in 2026.

The development comes in the wake of the country’s brutal crackdown on protests calling for justice for Mahsa Amini, the 22-year-old woman who died in police custody in September.

The CSW meets annually in March at UN Headquarters in New York and is described as the biggest gathering of gender equality advocates in the world.

The United States introduced the resolution, which received 29 votes in favour and eight against, with 16 countries abstaining.

The document expressed serious concern over the Iranian Government’s actions since September 2022 “to continuously undermine and increasingly suppress the human rights of women and girls”, and “often with the use of excessive force”.

Speaking ahead of the vote, US Ambassador Linda Thomas-Greenfield called the CSW the premiere UN body for promoting gender equality and empowering women.

“It cannot do its important work if it is being undermined from within,” she said. “Iran’s membership at this moment is an ugly stain on the Commission’s credibility.”

The Ambassador commended Iranian activists, both in the room and around the world, for their courage, foresight, sacrifices, and leadership.

She recalled that Mahsa Amini was accosted by the “morality police” in Iran’s capital, Tehran, on 13 September, who accused her of wearing her headscarf improperly.

The young woman was reportedly beaten on the way to custody. She fell into a coma and died three days later.

“We know she was killed for the crime of being a woman. And for too long, for too often, this was not such an unusual thing in Iran,” said Ms. Thomas-Greenfield.

“It is not at all unexpected that the United States is taking such unlawful action against Iran, given its long-standing hostility towards the Iranian people, but if carried out, it would be exceedingly dangerous to the UN system integrity,” he said.

The UN Commission on the Status of Women (CSW) was established in 1946, and has become instrumental in promoting women’s rights, documenting the reality of women’s lives throughout the world, and shaping global standards on gender equality and the empowerment of women.

Its 45 members are elected by ECOSOC, based on equitable geographical distribution, and serve for four years. 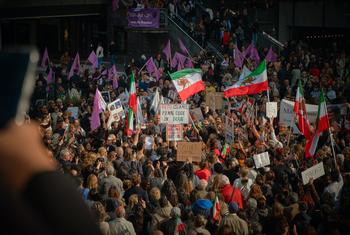 More than a dozen UN-appointed independent human rights experts on Thursday condemned the execution of a 23-year-old Iranian artist convicted for taking part in protests, and raised general alarm over any charges that are made which carry the death penalty.