© UNICEF/Wathiq Khuzaie
A family walks past a memorial set up at the location of a suicide bombing, claimed by ISIL, at Al-Shuhadaa Staduim in Babil, Iraq.

Providing justice for the communities impacted by the ISIL terror network in Iraq remains the key focus of the UN investigative team there, Special Adviser Christian Ritscher told the Security Council on Monday.

Highlighting the progress made by Investigative Team to Promote Accountability for Crimes Committed by Da’esh/ISIL (UNITAD), he said evidence collected and analysed, substantiated preliminary findings from his previous report.

He cited crimes committed against Christians such as enslavement and forced conversion; “notable progress” on the development and use of chemical and biological weapons; and inspections on the destruction of internationally protected cultural heritage sites.

“At this pivotal stage of our mandate, please allow me to state that my Team has now reached the next level on the path of holding ISIL perpetrators accountable for the core international crimes they committed”, he said.

He highlighted the excavation of several ISIL-related mass graves in Iraq and detailed that UNITAD has agreed with Germany to collect data and DNA reference samples from the Yazidi community residing there for a campaign to identify human remains in Iraq, “allowing survivors to eventually mourn their beloved ones”.

“As part of this programme, psychosocial support training is provided to Iraqi authorities to ensure international best practice is maintained when dealing with victims and survivors”, said Mr. Ritscher.

So far, his team had converted 5.5 million physical pages of documentary evidence of ISIL-related crimes into digital formats and is currently supporting digitization at six different Iraqi sites.

Moreover, they are part of UN system-wide efforts to move forward on repatriation of nationals from camps in neighbouring countries, such as Syria.

And UNITAD remains committed to improving information sharing with its Iraqi counterparts and has expanded arrangements with the country’s judiciary to allow sharing surrounding ISIL’s financial crimes, he told ambassadors.

A key goal of the investigative team is to support Iraq in holding ISIL members accountable for international crimes.

As such, it has held intensive one-week training courses for judges from across the country as well as a pilot training course on international crimes case-building with judges and prosecutors from the Kurdish Region of Iraq.

He hoped that the recently formed government would prioritize legislation, reminding that – bound by UN policies and best practices – sharing evidence with the Iraqi judiciary for criminal proceedings can only take place once the respective legal requirements and standards are met.

“Sharing information with the Iraqi judiciary…means a lot more than just handing over a huge box of evidentiary material that is comparable to thousands, even millions of puzzle pieces”, Mr. Ritscher said, describing it as a “means to deliver tailored assistance in accordance with the needs of the respective investigative judge or court”.

UNITAD has also been supporting other Member States in their investigations and prosecutions for ISIL crimes throughout the world.

So far, he said, 17 Member States have requested assistance from the UN team, to support national prosecutions.

“The ability of the Team to collect testimonial evidence from witnesses in direct response to these requests, combined with its capacity to identify corroborating internal ISIL documentation from battlefield evidence, has been of significant assistance in supporting investigations by national jurisdictions within these Member States”, said the senior UN official.

UNITAD is also bolstering the Joint Investigation Team in surfacing evidence for prosecuting ISIL’s crimes against the Yazidi minority in 2015, when thousands endured a genocidal campaign of sexual violence and enslavement, mass executions, forced conversions and other brutal crimes.

He explained that the team “supports this effort through focused interviews with Yazidi witnesses both in Iraq and abroad; the collection of battlefield evidence related to Yazidi enslavement networks; as well as specific searches against evidence in our holdings”.

“This work is key in ensuring that ISIL perpetrators, those who committed such heinous international crimes are held accountable before competent courts, wherever they are”.

In closing the Special Adviser said his team was moving even more rapidly to assist in bringing alleged ISIL members to justice, “regardless of where they may reside”.

“UNITAD will not stop to ensure that justice is delivered for the thousands of victims and survivors who have been impatiently waiting to see their day in court”, he spelled out.

UN Photo/Loey Felipe
Christian Ritscher, Special Adviser and Head of the Investigative Team, briefs the Security Council meeting on threats to international peace and security.
♦ Receive daily updates directly in your inbox - Subscribe here to a topic.
♦ Download the UN News app for your iOS or Android devices. 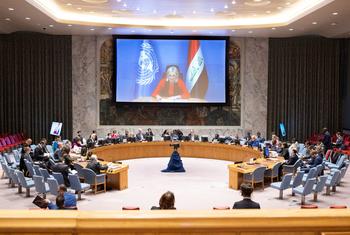 The absence of a functioning government in Iraq one year after elections were held is hard to justify, the top UN official in the country said on Tuesday, urging political leaders to put aside their differences for the common good. 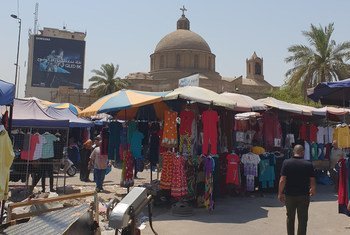 The UN chief on Monday issued a call for “calm and restraint” in the Iraqi capital Baghdad following a day of reportedly violent protests in and around the national parliament building, in the wake of the announcement from political leader and cleric Muqtada al-Sadr that he was leaving politics.