Peru has become the most food-insecure country in South America, according to the UN's Food and Agriculture Organization, FAO.

Some 16.6 million people - more than half the population -- now find themselves without regular access to enough safe and nutritious food.

It's a shocking reversal for Peru, an upper middle-income country according to the World Bank, that can grow all the food it needs.

According to a 2021 FAO study, 51 per cent of the population is living in moderate food insecurity. “20 per cent of that group is in acute food insecurity”, explains Fernando Castro Verastegui, Project coordinator at FAO Peru. “That means people have reduced the quality of their diet or are eating less than they need.”

Poverty is to blame, says the agency. The poverty rate this year is 25 per cent, meaning one in four Peruvians doesn’t have enough money to cover their basic food basket.

Most people end up simply alleviating their hunger, but not eating adequate food with all the necessary nutrients, such as proteins. In parts of the Peruvian Amazon rainforest - known locally as the “Selva” region - up to 70 per cent of the population is anaemic.

© Roberto Villanueva
The skyline of Chorrillos, one of Lima’s township in Peru.

In the poor and dusty suburb of Chorrillos, one of Lima’s shanty towns overlooking the Pacific Ocean, women are busy behind the stove.

Among them, Jenny Rojas Chumbe, a community activist, president of the soup kitchen “Ayuda Social” (or “social support”).

When COVID-19 hit the country, sending millions home with no income, Jenny saw up close the urgent needs in her community and started collecting food to organize soup kitchens.

These “ollas comunes” - as they are known locally – receive donations from food banks as well as other organizations and individuals. From 220 daily meals at the peak of the pandemic, she is still serving about 100 a day today, even though many have gone back to work.

“The number of meals we were giving had dropped to 50 a day, because the neighbours were doing better in terms of purchasing power. But lately, it’s been rising, because the crisis is affecting a lot of people. If you take the vegetables, they are far too expensive. A kilogramme of potatoes costs more than three Soles ($0.80), a litre of cooking oil, more than 12 Soles ($3.15),” Jenny explains.

Soaring potato prices have a real impact - and a powerful symbolic one in Peru:  it is on the shores of Lake Titicaca, that potatoes were first cultivated.

As for meat, chicken is the main source of protein in Peru, but only for those who can afford it. As a matter of fact, Jenny only cooks chicken for her neighbours, “once, or twice a week, because it would be out of our budget”.

Peru's annual inflation rate for 2022 remains above eight per cent in the past months, its highest level in 24 years. Staples like wheat, rice, and cooking oil have more than doubled in price.

The soup kitchens were the people’s response to the food problem that had been going on since before COVID, explains Fernando Castro Verastegui. “We had rates of, for example, malnutrition and anaemia that had stagnated. The economic, political, and environmental problems that we were already having were telling us that the food situation was at risk. When COVID came, this exploded.”

Peru was indeed hit badly by COVID-19. It suffered the world’s highest mortality rate during the pandemic, as more than 0.65 percent of the population succumbed to the virus. In parallel, lockdowns increased unemployment.

Added to the post-COVID downturn, inflation, driven by the war in Ukraine, weighs heavily on prospects for recovery. Peru is also experiencing the increase in prices, says Castro, as a result of a series of phenomena that are taking place at a global level, especially the increase in fuel prices and supplies, also as a result of the conflicts in Ukraine.

In addition to the price hikes of food and energy, FAO points out that government mismanagement, poor dietary habits, and an over-reliance on imported food staples and fertilizers are additional causes of Peru's food crisis.

Imported chemical fertilizers cost up to four times what they did a year ago, forcing farmers to reduce their use. The fear is that this will likely impact food production in the coming months and aggravate existing vulnerabilities in Peru.

© Roberto Villanueva
An agriculture worker sprays a farm field in Canta, province of Lima, Peru.
♦ Receive daily updates directly in your inbox - Subscribe here to a topic.
♦ Download the UN News app for your iOS or Android devices. 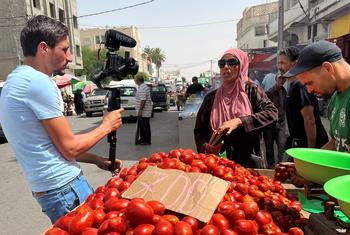 For many Tunisians, shortages of essential foods, fuel and key farming products linked to the war in Ukraine, have tested them to the limit, they’ve been telling UN News.