© UNICEF/Aldjim Banyo
The rivers Chari and Logone overflow in N'Djamena, after the heaviest rainy season in Chad in thirty years.

With the global population now at eight billion and growing, action or inaction by the world’s largest economies, the G20, will be critical to determine if everyone gets to live on a peaceful and healthy planet, UN Secretary-General António Guterres said at a press conference in Bali, Indonesia, on Monday.

Speaking on the eve of the G20 Summit there, the UN chief appealed for the bloc to support his initiatives to address climate change, sustainable development, the worldwide food and energy crises, and digital transformation.

The Summit is taking place at “the most pivotal, precarious moment in generations”, he told journalists.

Geopolitical divisions are sparking new conflicts, and making old ones hard to resolve, while “people everywhere are getting hit from every direction” by climate change and the rising cost of living.

“The G20 is ground zero for bridging divisions and finding answers to these crises and more,” he said.

As climate change is “the defining challenge of our age”, the Secretary-General reminded these countries that they produce 80 per cent of all global emissions.

He has proposed creating a Climate Solidarity Pact, bringing together developed and emerging economies to combine resources and capacities to benefit everyone on the planet.

He said it would see wealthy nations and international financial institutions provide funding and technical assistance to support emerging economies in accelerating their transition to renewable energy.

The deal will help end dependence on fossil fuels while providing universal, affordable, sustainable energy for all.

“G20 leaders can make or break the Climate Solidarity Pact that I intend to present again tomorrow.   Under this pact, they would make extra efforts this decade to keep the limit of 1.5 degrees alive,” said Mr. Guterres, referring to the goal to cap global temperature rise.

‘SOS’ for the SDGs

Developing countries are also unable to access finance needed to achieve the Sustainable Development Goals (SDGs), which include reducing poverty and hunger and investing in healthcare and education.

“The SDGs are issuing an SOS,” he warned.  “I therefore urge G20 economies to adopt an SDG stimulus package that will provide governments of the Global South with investments and liquidity, and offer debt relief and restructuring. “

Mr. Guterres noted that a majority of the G20 countries are on the boards of multilateral development banks “and so they can and must make it happen.”

The Secretary-General will also use the Summit to highlight the food and energy crisis generated by the war in Ukraine.

Focus will be on the need for urgent action to prevent famine and hunger in a growing number of places around the world.

He said the UN-brokered agreement on Ukrainian grain exports, as well as efforts to ensure Russian food and fertilizers can access global markets, are essential to global food security.

The Black Sea Grain Initiative has already helped to stabilize markets and bring food prices down, he added.

Meanwhile, engagement continues around access for Russian food and fertilizers, as well as renewal of the landmark deal, which was signed in July and set to expire later this week.

“On energy, the war in Ukraine has clearly demonstrated the dangers of our addiction to fossil fuels. It is the best possible argument for the fastest possible transition to renewable energy,” he said.

On Saturday, the World Food Programme (WFP) announced that it plans to facilitate the donation of 260,000 metric tonnes of fertilizer by the Russian fertilizer company Uralchem-Uralkali to countries in most need in Africa. WFP said it was grateful for the contributions and support.

The first shipment will be loaded onto a WFP-chartered vessel from the Netherlands next week. It will sail via Mozambique, with Malawi as the final destination.

The Secretary-General concluded by underlining the need for leadership in the digital transformation and for “guardrails” on technology.

“Powerful tech companies are running roughshod over human rights and personal privacy and providing platforms for deadly disinformation, in pursuit of profit,” he said.

Mr. Guterres is proposing a way forward based on a Global Digital Compact for an open, free, secure, and inclusive internet.

The Compact calls for universal connectivity via a “human-centred digital space” where free speech and privacy are protected, and which promotes the safe and responsible use of data.

The UN chief has also called for a global code of conduct that promotes integrity in public communications as well as information literacy. 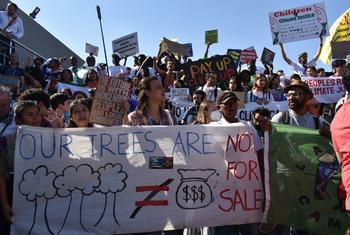