Ukraine: UN and partners provide life-saving aid to some 13.5 million

© UNICEF/Denys Vostrikov
While the war in Ukraine has created terrible suffering for children and their families, as the freezing temperatures of winter approach, the situation will become even more challenging.

Ukraine: UN and partners provide life-saving aid to some 13.5 million

The United Nations and humanitarian partners are continuing to reach growing numbers of people impacted by the war on the ground with life-saving assistance, a UN spokesperson told journalists on Thursday.

“Since February, aid workers have provided critical aid and protection services to some 13.5 million people across all regions of Ukraine”, Associate Spokesperson Stéphanie Tremblay told journalists at a regular briefing in New York.

She added that more than 4.2 million people have received cash assistance over the past eight months and that markets are reopening, as the Government works to restore banking services in the Kharkiv and Kherson regions, where Ukraine has recently regained control.

Moreover, partners are also extending their cash programmes also in these areas.

Russian military commanders announced Wednesday that their forces were withdrawing from Kherson – it’s largest gain during the invasion - with the Ukrainian military reporting on Thursday that it had made rapid advances on two fronts to the outskirts of the southern city.

With hundreds of medical facilities across the country damaged, humanitarians are working to bolster health assistance even as the war continues to decimate health services.

“For example, this month, the UN Population Fund (UNFPA) is delivering 30 mobile clinics that will provide reproductive health services for women in at least 19 regions of Ukraine,” said Ms. Tremblay.

“Since the beginning of the war, we and our partners have provided health services to more than 8.6 million people”.

Meanwhile, as infrastructure damage has made it increasingly difficult for communities to access clean water, the UN and its partners continue to provide water and hygiene assistance, having reached 5.7 million so far.

© UNICEF/Ashley Gilbertson
A man inspects damage on the roof of an apartment complex destroyed by artillery and air strikes in a Kharkiv suburb..

The UN spokesperson attributed the scale up of aid to donor support, crediting them for providing more than 70 per cent of the $4.3 billion requested for aid operations.

“However, as the war continues to drive humanitarian needs in Ukraine, the international community’s support will be critical to ensure that aid organizations can continue supporting the people of Ukraine”, she reminded.

Meanwhile, the UN humanitarian office, OCHA, expressed concerned over an increasing number of incidents involving mines and explosive ordnances – particularly in the recently regained Kharkiv region in the northeast.

At least five incidents of mines detonating or explosions causing deaths or injuries occurred during the first two days of this month, compared to four throughout the who second half of October.

While explosive ordnances have been responsible for hundreds of deaths, injuries or maiming since the beginning of the war, just on Tuesday, two people were killed and two others injured while repairing a road in Chuhuivskyi District, Kharkiv region.

Moreover, accidents involving farmers trying to get back to their land following Russian withdrawal, are becoming progressively more common.

Authorities say that since March, more than 150,000 explosive devices have already been removed and destroyed, but millions remain. Clearing landmines in Ukraine could take decades, the UN spokesperson said. 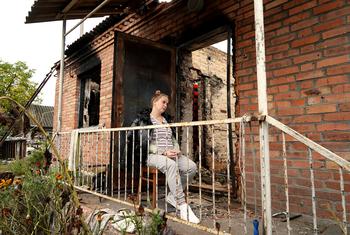 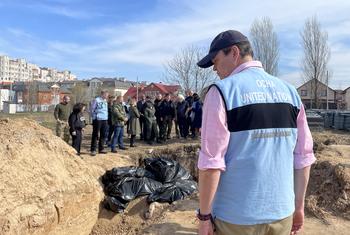 The Independent Commission of Inquiry on Ukraine, presented its first detailed written report to the UN General Assembly on Tuesday, which concludes that there are reasonable grounds to believe “an array” of war crimes, violations of international human rights and humanitarian law have been committed.