UNDP Zimbabwe
Half of Zimbabweans fell into extreme poverty during the COVID-19 pandemic.

A flagship UN poverty study released on Monday, the International Day for the Eradication of Poverty, finds that significant poverty reduction is possible, and new ways of calculating the problem can help humanitarians and governments better target aid.

The Multidimensional Poverty Index (MPI), a joint analysis from the UN Development Programme (UNDP) and the Oxford Poverty and Human Development Initiative (OPHI) at the University of Oxford, goes beyond measuring poverty as a measurement of poverty, and looks at other indicators, from access to education and health, to living standards such as housing, drinking water, sanitation and electricity.

Using this way of calculating the issue, the study shows that, even before the COVID-19 pandemic and the current cost-of-living crisis are accounted for, some 1.2 billion people in 111 developing countries are living in acute multidimensional poverty - nearly double the number who are seen as poor when poverty is defined as living on less than $1.90 per day.

We can't #EndPoverty &amp; achieve the #SDGs w/out addressing the root causes of #MultidimensionalPoverty. https://t.co/YZeCArOpBD https://t.co/tq2nmBvhEk

Because there are different aspects of poverty in different regions, the study calls for the development of strategies that tackle the issue to be tailored to specific countries and regions.

It also identifies recurring patterns of poverty (“deprivation bundles”), that commonly affect those at risk. For example, more than half of those living in poverty lack both electricity and clean cooking fuel, whilst a third are deprived of nutrition, cooking fuel, sanitation and housing at the same time.

The experience of families in Lao PDR, for example, shows the interconnected nature of living in poverty, and the complexity of reducing it.

Children are sent to collect firewood because of a lack of cooking fuel, so they can’t go to school. Simply providing funds to build a school would, therefore, make no sense, without first fixing the fuel problem.

Despite the scale of the challenge, significant improvements have been made in reducing poverty.

In India, some 415 million people left multidimensional poverty in a 15-year period - a historic change - and data gathered before the COVID-19 pandemic show that 72 countries had significantly reduced poverty over recent years.

The report showcases success stories from countries that have used integrated poverty reduction strategies: Nepal’s investment in sanitation, for example, has improved access to drinking water, child nutrition, and, through a reduction in diarrhoea and child mortality.

Reacting to the findings, Achim Steiner, the head of UNDP, said that, at a time when government budgets are being squeezed, cutting-edge data and analytics can pinpoint the areas where spending will have the most impact.

For example, the report shows, he said, “that decarbonization and expanding access to clean energies will advance climate action, and is also critical for nearly 600 million multidimensionally poor people who still lack access to electricity and clean cooking fuel.”

The study, he continued, will be “vital to inform UNDP’s efforts across the globe as we work with our partners from the United Nations and beyond to reach our bold objective of helping lift 100 million people out of multidimensional poverty by the year 2025”.

UNDP India/Dhiraj Singh
In India, five out of six people in multidimensional poverty were from lower tribes or castes.

In his message marking the Day, the UN Secretary-General, António Guterres, warned that the goal of eradicating poverty is being undermined, and “the world is moving backwards”.

The UN chief declared that the COVID-19 pandemic set back more than four years of progress, and also cited widening inequality, the “gathering shadow” of a global recession, and the climate crisis as reasons for the faltering efforts.

Mr. Guterres said that the theme for this year’s Day – “Dignity for all in practice” – must be a rallying cry for urgent global action, to finally “consign poverty to the pages of history”. 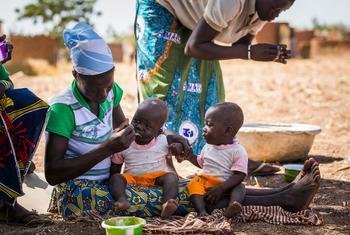 Extreme poverty in West Africa rose by nearly three per cent in 2020, another fallout from the COVID-19 pandemic, a UN-backed report launched on Thursday that looks at the socio-impact of the crisis has revealed.