© UNDP
Rich countries have the resources to end the debt crisis, which has deteriorated rapidly in part as a consequence of their own domestic policies.

Fifty-four countries that are home to more than half of the poorest people on the planet need urgent debt relief now, the UN Development Programme (UNDP) said in a paper published on Tuesday that calls for rich countries to step up.

Without action, poverty will rise and desperately needed investments in climate adaptation and mitigation simply will not happen, the agency warned.

54 developing economies accounting for more than half of the world’s poorest people need urgent debt relief.

Rich countries have the resources to end the debt crisis.

More on how to help end the debt crisis &amp; build a #ResilientFuture in our new report: https://t.co/OOCTioAX8r https://t.co/A7otXEpiqN

The paper - Avoiding ‘Too Little Too Late’ on International Debt Relief – highlights the ripple effects of government responses to the recent economic crisis, and the potential impacts.

It explains why debt restructuring cannot wait until interest rates drop, or a global recession occurs.

“Debt relief would be a small pill for wealthy countries to swallow, yet the cost of inaction is brutal for the world’s poorest. We cannot afford to repeat the mistake of providing too little relief, too late, in managing the developing economy debt burden,” said Achim Steiner, the UNDP Administrator.

The 54 countries with severe debt problems include 28 of the top 50 most climate-vulnerable nations in the world.

Although they are home to more than half of the world’s poorest people, they represent little more than three percent of the global economy.

The paper outlines several policy actions for debt restructuring, noting that a deal could be on the horizon.

Markets conditions around the globe are shifting rapidly. UNDP said volatility is being fuelled by “a synchronized fiscal and monetary contraction”, along with low growth.

At the same time, holders of many developing economy bonds report they are trading at deep discounts ranging from between 40 to 60 cents on the dollar.

A debt deal might now be possible, UNDP said, as these conditions encourage private creditors to negotiate debt relief under a Common Framework elaborated by the G20 group of countries, the world’s largest economies.

“When emerging market bonds trade at 40 cents on the dollar, private creditors suddenly become more open to negotiation. The missing ingredient, at this moment, are financial assurances from major creditor governments to clinch a deal,” said George Gray Molina, Senior Economist at UNDP.

Rich countries have the resources to end the debt crisis, the paper argues, as the rapid deterioration is partly due to their own domestic policies.

This week, G20 finance ministers will meet in Washington, DC, ahead of the annual meetings of the World Bank and the International Monetary Fund (IMF).

UNDP believes conditions are ripe for creditors and debtors to kickstart debt restructuring talks under the G20 framework.

The paper proposes a way forward, focused on key areas such as debt sustainability analysis, official creditor coordination, private creditor participation, and the use of state-contingent debt clauses that target future economic and fiscal resilience.

Furthermore, the Common Framework could shift focus to comprehensive restructurings that will allow countries a faster return to growth, financial markets, and development progress.

UNDP pointed out that effective debt restructuring is only one vital element of ensuring developing countries have sufficient finances to achieve progress on sustainable development.

New sources of funding are urgently needed, the agency said, for investments in climate adaptation and mitigation. 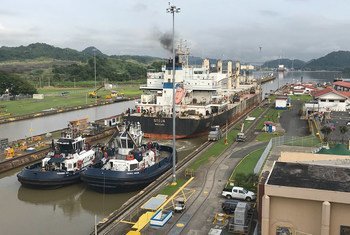 Trade growth is expected to lose momentum in the second half of this year and remain subdued in 2023, as the global economy sustains multiple shocks, such as ripple effects from the war in Ukraine, the latest forecast from the World Trade Organization (WTO) has revealed.