OCHA/Viviane Rakotoarivony
Communities in southern Madagascar continue to cultivate despite the challenges of desertification.

As government representatives begin to finalize the agenda for the COP27 climate change conference in Egypt next month, the UN chief told journalists in New York that the work ahead is “as immense as the climate impacts we are seeing around the world”.

Speaking to reporters in New York, as the pre-COP meeting got underway in Kinshasa, Secretary-General António Guterres laid out the worsening impacts worldwide.

“A third of Pakistan flooded. Europe’s hottest summer in 500 years. The Philippines hammered. The whole of Cuba in black-out. And here, in the United States, Hurricane Ian has delivered a brutal reminder that no country and no economy is immune from the climate crisis,” he highlighted.

And while “climate chaos gallops ahead, climate action has stalled,” he added.

On the first day of pre #COP27, @antonioguterres tells reporters: the work ahead is immense. As immense as the climate impacts we are seeing around the world. https://t.co/cozU72igRq

The top UN Official underscored the importance of COP27 while warning that the collective commitments of G20 leading industrialized nations governments are coming “far too little, and far too late”.

“The actions of the wealthiest developed and emerging economies simply don’t add up.,” he said, pointing out that current pledges and policies are “shutting the door” on limiting global temperature to 2°C, let alone meet the 1.5°C goal.

Mr. Guterres warned, “we are in a life-or-death struggle for our own safety today and our survival tomorrow,” saying there is no time for pointing fingers or “twiddling thumbs” but instead requires “a quantum level compromise between developed and emerging economies”.

“The world can’t wait,” he spelled out. “Emissions are at an all-time high and rising”.

And he said that while pursuing their own “drop-in-the-bucket initiatives” international financial institutions must overhaul their business approaches to combat climate change.

Meanwhile, as the planet burns, the Ukraine war is putting climate action on the back burner and the dynamic climate actors in the business world continue to be hampered by “obsolete regulatory frameworks, red tape and harmful subsidies that send the wrong signals”.

Meaningful progress must be made to address loss and damage beyond countries’ abilities to adapt as well as financial support for climate action, upheld the UN chief

Decisions must be made now on the question of loss and damage as “failure to act” will lead to “more loss of trust and more climate damage,” he said, describing it as “a moral imperative that cannot be ignored”.

COP27 is “the number one litmus test” of how seriously governments take the growing climate toll on the most vulnerable countries.

“This week’s pre-COP can determine how this crucial issue will be handled in Sharm el-Shaikh,” he informed the media, noting that the world needs clarity from developed countries on the delivery of their $100 billion pledge to support climate action in developing countries.

Moreover, adaptation and resilience funding must represent half of all climate finance; multilateral development banks “must raise their game”; and emerging economies need support to back renewable energy and build resilience.

While the Resilience and Sustainability Trust led by the International Monetary Fund (IMF) is a good start, major multilateral development bank shareholders must be the driving force for transformative change, he continued.

“On every climate front, the only solution is solidarity and decisive action”.

The Secretary-General chief upheld that by showing up at COP27 in Sharm el-Shaikh, all countries – led by the G-20 – can demonstrate that “climate action truly is the top global priority that it must be”.

Meanwhile in Kinshasa, UN Deputy Secretary-General Amina Mohammed warned environment ministers and others that the window of opportunity to avert the worst impacts of the climate crisis is closing.

She stressed that greater support for climate adaptation in developing countries “must be a global priority”, particularly progress on adaptation finance.

Ms. Mohammed recalled that at last year’s COP26 conference in Glasgow, developed nations had promised to double adaptation support to $40 billion dollars a year by 2025.

The UN deputy chief called for a clear roadmap on how the funding will be delivered, starting this year.

She added that $40 billion is “only a fraction of the $300 billion that will be needed annually by developing countries for adaptation by 2030”.

“We need progress…that shows that leaders fully comprehend the scale of the emergency we face and the value of COP, as a space where world leaders come together to solve problems and take responsibility,” she said.

The deputy chief said that it is time to prove that we are moving in the right direction “with an outcome that shows our collective commitment to addressing the climate crisis because people, and the children here today, and the planet matter”.

The road to Sharm

Simon Stiell, Executive Secretary of UN Climate Change (UNFCCC) said that COP27 was a "gear-shifting point as we pivot from negotiations to implementation and demonstrate progress on the Glasgow outcomes (at COP26)".

"To make this happen we need to make progress here in Kinshasa, finding areas of convergence on the key issues. Those critical areas of convergence identified will be carried forward to Sharm el-Sheikh, where we will further work to reach a consensus between all Parties on concrete outcomes that are sufficiently ambitious to respond to the crisis we are in. The world is watching our work, desperately needing proof that commitments are real and being met.” 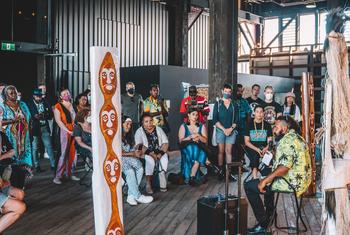 The UN Human Rights Committee found on Friday that Australia’s failure to adequately protect indigenous Torres Islanders against climate change impacts, has violated their rights to enjoy their culture, free from “arbitrary interference” with their private life, family and home. 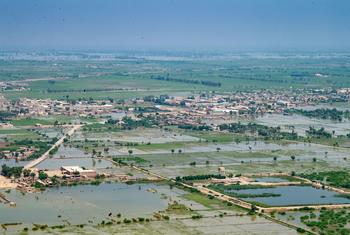 During a private meeting of Heads of State and Government, held on Wednesday at UN Headquarters in New York, UN Secretary-General António Guterres called for more action and leadership to tackle the climate crisis, warning that efforts to keep the rise in global temperatures to 1.5 degrees above pre-industrial levels is “on life support”.