Human rights: ‘Disturbing trends’ in reprisals against those cooperating with the UN continues

UN Photo/Marco Dormino
A Human Rights Officer interviews a displaced witness in Menaka, in northern Mali. In May 2018, a delegation led by Human Rights Officers travelled to Menaka to investigate the recent armed attacks in the settlements of Aklaz and Awakassa.

Human rights: ‘Disturbing trends’ in reprisals against those cooperating with the UN continues

People in 42 different countries across the world faced reprisals and intimidation on the basis of their cooperation with the United Nations to defend human rights, according to the annual UN report on the issue, which also highlights other disturbing trends.

For a third of the countries named in the report, individuals and groups either refrained from cooperation, or only agreed to report on an anonymous basis, for fear of reprisals.

“Shocking though this number is, many cases of reprisals are not even reported,” Assistant Secretary-General for Human Rights (OHCHR) Ilze Brands Kehris told the UN Human Rights Council on Thursday.

The report, Cooperation with the United Nations, its representatives and mechanisms in the field of human rights, details how victims of rights violations, human rights defenders and journalists have suffered reprisals and intimidation by States and non-State actors – including by being detained, targeted by restrictive legislation and surveilled both online and offline.

New report shows people in 42 countries across the world faced reprisals and intimidation for cooperating with the UN on #HumanRights, highlighting disturbing trends over the past year, incl. surveillance, restrictive legislation and self-censorship: https://t.co/jU2V8kHxXh https://t.co/oTTHbPv9ny

Broad base of reprisal

All of the highlighted cases happened between 1 May 2021 and 30 April 2022 and involved individuals and groups who cooperated with UN human rights mechanisms, or used UN procedures to share information, testimonies and seek redress for human rights violations and abuses.

People who tried to cooperate with the UN or were perceived as doing so, were also affected.

“Despite positive developments, including pledges and shared commitments by Member States against reprisals, this report once again shows the extent to which people are pursued and persecuted for raising human rights concerns with the UN,” said Ms. Brands Kehris.

The surveillance of individuals and groups who cooperate with the UN continued to be reported in all regions, with growing evidence of expanded online surveillance and cyberattacks, according to the report.

At the same time, the use and impact of restrictive government legislation that prevents and punishes cooperation with the UN, resulted during the year, in some long-term prison sentences or house arrest.

And recurring and similar allegations of intimidation were reported in numerous countries, which could indicate a pattern, said OHCHR.

Self-censorship, choosing not to cooperate with the UN or doing so anonymously amid concerns for their safety, is becoming another global tendency.

Increased surveillance and monitoring, as well as the fear of criminal liability, have created what the report terms a “chilling effect” of silence when it comes to reporting violations, stopping people from cooperating further with the UN and deterring others from doing so.

As in previous years, the report shows that intimidation and reprisals disproportionally affect certain populations and groups, including representatives of indigenous peoples, minorities, or those who work on environment and climate change issues, as well as people who may suffer discrimination based on age, sexual orientation and gender.

“The risks affecting women victims, as well as women human rights defenders and peace builders, who share testimony and cooperate with the UN, remain daunting,” said the senior OHCHR official, vowing to work to “ensure that all can safely engage with the UN”.

In closing, she said the Human Rights Council “and the whole UN system must continue sending a clear message of no tolerance for intimidation and reprisals and must take action to address the issue resolutely.
We need to better a support, empower, and protect those who engage with us, often in response to mandates established by Member States.

“The impact of our work and our credibility depend on it and, first and foremost, we owe it to those who put their trust in us.” 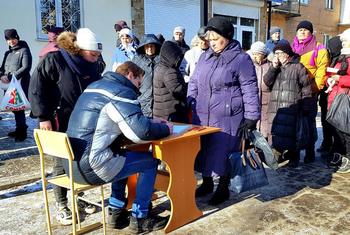 Ongoing armed attacks by Russia against Ukraine have led to devastating human rights abuses there, according to a new report released on Tuesday by the UN Human Rights Monitoring Mission for the war-torn country (HRMMU).