© UNICEF/Shehzad Noorani
Children in Sudan receive a peanut-based paste for treatment of malnutrition.

The situation for Sudan’s most vulnerable children is so desperate that half of the most severely malnourished youngsters are expected to die without urgent humanitarian intervention, UN agencies said on Friday.

“As we speak today, 650,000 kids are suffering from severe acute malnutrition. If not treated, half of them will die,” said UN Children’s Fund (UNICEF) Representative in Sudan, Mandeep O Brien, underscoring what veteran aid workers have called an unprecedented crisis.

Children in Sudan are caught in a perfect storm of crises on top of crises, with more than one out of every three of Sudan’s children are in need of humanitarian assistance. Read the full briefing by @UNICEFSudan Representative @MandeepOBrien here -&gt;https://t.co/XcKNEhnOL0

Spiralling recent problems in Sudan have their roots in a military coup in October 2021 that prompted a freeze in international funding for aid operations and which has forced UN relief teams to cut rations in half, in some cases.

“At the moment, WFP (has) projected that about 15 million people would go hungry every day since the hunger season started, and we are now doing an assessment because our indicators projected that this could rise up to 18 million by the end of this month,” he said.

“We are still grappling with an increased incidence of intertribal conflicts and violence, and this in fact has spread now not just to Darfur, but to other parts of the country…The Ukraine War also has had some significant impact. All of this in the context of a political unstable country, has resulted in an unprecedented humanitarian crisis this year.”

In an appeal to the international community to “stand in solidarity with the children of Sudan”, UNICEF’s Mandeep O Brien noted that the crisis reflected much more than a lack of food, with basic health services, clean water, sanitation and education severely lacking.

“Routine immunization, unfortunately, is declining in Sudan. Between 2019 and 2021, the number of children who have not received a single dose of lifesaving vaccines has doubled,” she told journalists in Geneva.

This was linked to the “ripple effects of the war in Ukraine, lingering impacts from the COVID-19 pandemic, and extreme weather resulting from the climate crisis,” he said.

Fresh intercommunal clashes this year and the burning and looting of villages, markets, houses, and livestock across the Darfur states, Kordofan and Blue Nile States has displaced over 177,000 people.

“We also have around 3.7 million internally displaced", he added. "And as outlined by my colleagues here, the humanitarian crisis, which is actually resulting itself in a food crisis, is impacting the marginalized communities and amongst those, refugees and the IDPs.”

Humanitarian funding levels for all three agencies remain far below where they need to be to provide effective prevention support. The fear is that unless pledges are forthcoming soon, the cost of having to respond to a far greater emergency will be far higher.

Illustrating the extent of the funding gap, by 13 September, UNHCR had received just one third of the $348.9 million needed this year to deliver an effective response and provide life-saving assistance and protection amidst the growing needs. 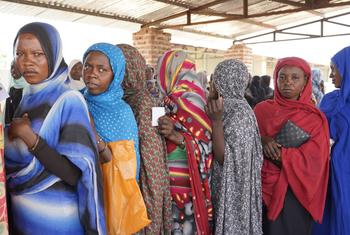 Civilians are in increasing danger, while humanitarian needs across Sudan “are growing exponentially”, the head of the UN mission in Sudan told ambassadors in the Security Council on Tuesday. 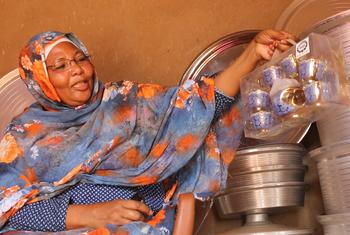 A successful return home to Sudan

Migrants who return home often face significant obstacles in rebuilding their lives. When her situation in Egypt became too difficult, Fatima decided to move back to Sudan, her homeland. With the help of the UN, she has started a small business, and is providing for her family.