© FAO/IFAD/WFP/Luis Tato
In Niger, as in many other parts of the Sahel, climate shocks have resulted in recurring droughts with devastating impacts on the region's already vulnerable populations.

Rising insecurity, including the proliferation of terrorist and other non-State armed groups, coupled with political instability, is creating a crisis in the Sahel that poses a “global threat”, the UN chief warned Thursday’s high level meeting on the vast African region, which took place behind closed doors at UN Headquarters in New York.

“If nothing is done, the effects of terrorism, violent extremism and organized crime will be felt far beyond the region and the African continent”, said Secretary-General António Guterres, in his remarks issued by his Spokesperson’s Office.

“A coordinated international breakthrough is urgently needed. We must rethink our collective approach and show creativity, going beyond existing efforts.”

The insecurity is making a “catastrophic humanitarian situation even worse”, he said, leaving some beleaguered national governments, without any access to their own citizens.

Meanwhile, “non-State armed groups are tightening their deadly grip over the region and are even seeking to extend their presence into the countries of the Gulf of Guinea.”

The indiscriminate use of violence by terrorist and other groups means that thousands of innocent civilians are left to suffer, while millions of others are forced from their homes, Mr. Guterres told the meeting of national leaders, during the High Level Week summit.

“Women and children in particular are bearing the brunt of insecurity, violence and growing inequality”, he said, with human rights violations, sometimes committed by security forces mandated to protect civilians, “of great concern”.

© UNOCHA/Michele Cattani
Refugee women prepare food in a displacement site in Ouallam, in the Tillaberi region of Niger.

And the crises are being compounded by climate change, said the UN chief, with soil erosion and the drying-up of water sources, “thereby contributing to acute food insecurity and exacerbating tensions between farmers and herders.”

“Against a global backdrop of turmoil on energy, food and financial markets, the region is threatened by a systemic debt crisis that is likely to have repercussions throughout the continent.”

The conventional international finance remedies are not helping, the UN chief said bluntly, with more and more countries forced to channel precious reserves into servicing debt payments, leaving them unable to pursue an inclusive recovery, or boost resilience.

The UN chief called for a “renewal of our collective efforts to promote democratic governance and restore constitutional order” across the whole Sahel, which stretches from Senegal in the west to northern Eritrea and Ethiopia in the east, a belt beneath the Sahara of up to 1,000 kilometres.

The rule of law and full respect for human rights are indispensable for ensuring security and sustainable development, Mr. Guterres said.

Addressing national leaders and senior politicians from the region, he said the UN “stands ready to work alongside you, with urgency and solidarity, for a peaceful, stable and prosperous Sahel.” 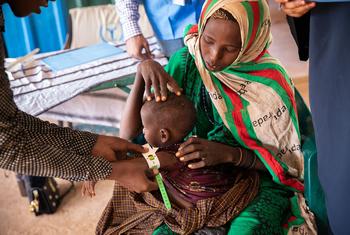 The number of people facing life-threatening levels of hunger worldwide without immediate humanitarian aid, is expected to rise steeply in coming weeks, the UN said on Wednesday, in a new alert about looming famine in the Horn of Africa and beyond. 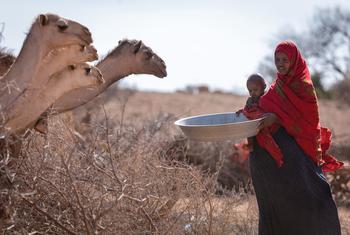 On Tuesday, UN Children’s Fund UNICEF warned that children in the Horn of Africa and the vast Sahel region “could die in devastating numbers” without urgent intervention and support. In the last five months, the number of people in Ethiopia, Kenya and Somalia without reliable access to safe water, has risen from 9.5 million to 16.2 million