Just a few hours before the start of the crucial Transforming Education Summit, UN Children’s Fund UNICEF on Friday, warned that globally, only a third of 10-year-olds are estimated to be able to read and understand a simple written story. This shocking statistic represents a 50 per cent decrease from pre-pandemic estimates.

Education is the future

“The trajectory of our education systems is, by definition, the trajectory of our future”, she added. “We need to reverse current trendlines or face the consequences of failing to educate an entire generation. Low levels of learning today mean less opportunity tomorrow.”

The much-anticipated Transforming Education Summit begins at UN Headquarters in New York today, Friday, with a day of youth-led mobilization, which includes contributions from the Secretary-General and his deputy, together with the President of the General Assembly.

Saturday has been billed as “solutions day”, led by UN deputy chief Amina Mohammed, and on Monday, UN chief António Guterres will introduce his vision statement, along with world leaders, in the General Assembly Hall, as the summit comes to a close.

During the COVID-19 pandemic, prolonged school closures and a lack of access to quality learning exposed and exacerbated a pre-existing learning crisis, that has left millions of schoolchildren without foundational numeracy and literacy skills.

To draw attention to the education crisis and the need to transform learning worldwide, UNICEF has created the ‘Learning Crisis Classroom’, a model classroom that represents the scale of children failing to learn critical foundational skills.

The installation will be displayed at the visitor’s entrance of UN Headquarters in New York between 16 and 26 September. The model will serve as a reminder to government officials, heads of state and everyday visitors of the urgent need for mass global investment in education.

A third of the desks in the model classroom are made of wood and are fully functioning with an iconic UNICEF backpack placed on the school chair behind it.

This group is meant to represent the estimated one-third of 10-year-olds globally who are able to read and understand a simple written story.

The remaining two-thirds of desks are almost invisible and made of clear material to signify the 64 per cent of children estimated to be unable to read and understand a simple written story by age 10.

The invisible nature of these desks corresponds to the short term crisis at play, said UNICEF, but also signifies the scope of civic contributions that will be lost, if urgent action is not taken to give all students the tools to thrive.

As leaders meet at the Transforming Education Summit, UNICEF is calling on governments to commit to reaching all children with quality education.

The agency further urges new effort and investment to re-enroll and retain all children in school, to increase access to remedial and catchup learning, to support teachers - and give them the tools they need - and to make sure that schools provide a safe and supportive environment so all children are ready to learn.

This scheme, promoted by UNICEF under the acronym ‘RAPID,’ represents efforts by the international community to take legitimate steps to promote better education and unlock the potential of millions of children.

Also on Friday, more than 100 leaders delivered a letter calling  on the Summit to commit resources to tackle the global education crisis, and to commit to bold measures and deliver “the first generation in history where every child goes to school”.

In the letter, a host of former government Presidents, Prime Ministers, Foreign Ministers, and others, including former Nigerian president Olusegun Obasanjo, former UNDP Administrator Helen Clark, and former UN Secretary-General Ban Ki-moon, told the Summit: “We are so far away from our goal of universal education by 2030 that unless we act quickly and generously, we will fall further behind on our Sustainable Development Goal 4 commitment to ‘ensure inclusive and equitable quality education and promote lifelong learning opportunities for all.’”

The signatories of today’s letter proposed “a compact for Global Education between developing countries and the developed economies that provide donor aid” which includes, among others, developing countries to raise their education budgets to 15-20 per cent of their public spending and 4-6 per cent of their income; supported by an increase in sustainable funding for education through domestic action to reform national tax systems, coupled with international action to cut tax loopholes and illicit financial flow; and multilateral development banks to raise International Development Assistance from 10 per cent to 15 per cent to education, unlocking an additional $15 billion over the next five years for 200 million children. 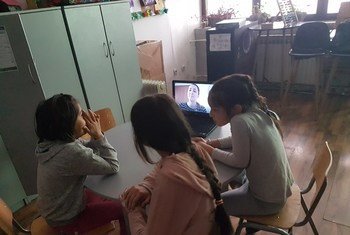 Reimagining education in Bosnia and Herzegovina: A Resident Coordinator Blog

As the Transforming Education Summit kicks off on Friday, during the opening week of the 77th UN General Assembly session in New York, Ingrid Macdonald, the UN Resident Coordinator in Bosnia-Herzegovina, reflects on the important progress that the United Nations has made in supporting the authorities efforts to advance more equitable and inclusive education across the country. 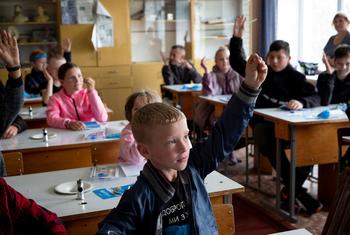 One of the centrepieces of the opening week of the new General Assembly session is an event aimed at focusing fresh attention on the global crisis surrounding learning, and proposing solutions to make education fit for the Twenty-First Century. Ahead of the event, UN News spoke to Leonardo Garnier, the Special Advisor charged with making the Transforming Education Summit a success.