As hundreds of Heads of State and Government prepare to fly into New York for the General Debate of the new General Assembly, UN Secretary-General António Guterres has called on them to bring hope to a fractured world, and increase efforts to fight the climate crisis.

At a press briefing on Wednesday, Mr. Guterres promised to address the many challenging issues facing the planet, in his speech next week to the General Assembly, which will also contain concrete recommendations for lasting solutions, and a call to action.

The UN chief began by recalling the devastation he witnessed on his recent trip to flood-hit Pakistan, which he described as a window into a “future of permanent and ubiquitous climate chaos on an unimaginable scale”.

Mr. Guterres, who is from Portugal, noted that the flooding covers an area three times the size of his homeland.

In typically uncompromising language, he lambasted the global response to the climate crisis as inadequate, unjust and, at its heart, a betrayal. “Whether it’s Pakistan, the Horn of Africa, the Sahel, small islands or Least Developed Countries, the world’s most vulnerable – who did nothing to cause this crisis – are paying a horrific price for decades of intransigence by big emitters”.

G20 must lead the way

Targeting the leaders of the world’s wealthiest nations, the UN chief reminded them that they are responsible for the vast majority of climate-related emissions and, even though they are also heavily impacted by record droughts, fires and floods, climate action in response, appears to be on life-support.

He wondered aloud if the reaction would be different if one third of G20 countries, rather than Pakistan, were currently underwater.

All countries need to cut emissions every year - with the G20, as the leading emitters, leading the way, Mr. Guterres told correspondents in New York - until the global temperature rise is limited to 1.5 degrees above pre-industrial levels.

Returning to the example of Pakistan, Mr. Guterres insisted that the country, and other climate hotspots, need flood-resilient infrastructure now, arguing that at least half of all climate finance, must go to adaptation and climate resilience.

That funding, he said, must come from the leading economies.

The UN has hailed the success of the Black Sea Grain Initiative, which has enabled food and fertilizer supplies to finally leave war-torn Ukrainian ports, and played a part in reducing global food prices, as they reached record highs following Russia’s invasion.

However, there is still a real risk of multiple famines this year, Mr. Guterres warned.

Global hunger was already rising before the COVID-19 pandemic, he said, and has never recovered. Many countries are dealing with a cost-of-living crisis, which is hitting the poorest people and communities hardest, and the rights of women and girls worldwide, are going into reverse.

The Secretary-General pointed out that, at a time of high geopolitical tensions, a lack of action to halt the climate crisis will have severe knock-on effects, such as mass migration and increased instability.

Mr. Guterres slammed the actions of populist politicians who, he said, are showing “a shocking disregard for the poorest and most vulnerable in our world”, pitting people against one another, employing discrimination, misinformation, and hate speech.

“This year’s General Debate must be about providing hope”, concluded Mr. Guterres. “That hope can only come through the dialogue and debate that are the beating heart of the United Nations”.

The UN chief told reporters during a lengthy and detailed question and answer session after his scripted remarks, that he had spoken to Russian President Vladimir Putin just before addressing correspondents in New York.

“We had the opportunity to discuss the Black Sea Grain Initiative, and its possible expansion…We have discussed the obstacles that still exist in relation to the exports of Russian food and fertilizers.”

He said there was a danger of a “market crunch” if more Russian fertilizers are not able to reach countries in dire need for future crop production, adding that it was “absolutely essential” to remove obstacles to fertilizer exports.

He said the two leaders had also discussed the question of Ukrainian prisoners of war, and also the UN Fact-Finding Mission, which is looking into an incident at Olenivka on 29 July, which led to the death of 53 Ukrainian POWs, and injured dozens more.

The UN chief said President Putin had indicated the UN team would be given access to the area where the attack took place. “There will be no obstacle from the Russian side” to go wherever investigators choose to go, “and that is a very important aspect”, he added.

Asked about the possibilities of helping broker a peace deal overall, Mr. Guterres said it was important to be realistic.

“It would be naïve to think that we are close…My good offices are ready, but I have no illusions that, at the present moment, the chances of a peace deal are minimal…So, obviously I go on with my contacts with both sides and hope that one day, it will be possible to move into a higher level of discussion.”

‘Let us tell the next generation their futures are worth fighting for,’ says Shahid 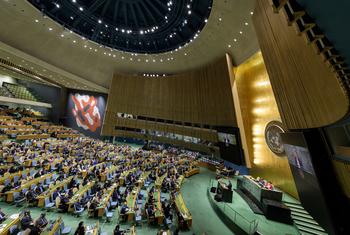 With just a few weeks to go until the opening of the 77th session of the UN General Assembly, the UN diplomatic community, as well as residents of New York City, are bracing for the annual arrival of Heads of State and Government from around the world, after two years of disruption wrought by COVID-19. Many details are still to be confirmed, but here are five things to look out for between 12 and 27 September.