World food prices have fallen for a fifth consecutive month but are still nearly eight per cent higher than a year ago, the UN Food and Agriculture Organization (FAO) reported on Friday.

Its latest Food Price Index shows that the prices of five commodities - cereals, vegetable oil, dairy, meat and sugar - were lower in August than in July.

The Index tracks the monthly international prices of these breadbasket staples. It averaged 138.0 points last month, down nearly two per cent from July, though 7.9 per cent above the value a year before.

FAO said the decline in cereal prices reflected improved production prospects in North America and Russia, and the resumption of exports from Black Sea ports in Ukraine.

A landmark agreement to unblock Ukraine grain exports amid the ongoing war was signed in July by the country, Russia, Türkiye and the UN.

Rice prices on average held steady during August, while quotations for coarse grains, such as maize, increased marginally.

Vegetable oil prices decreased by 3.3 per cent, which is slightly below the August 2021 level.  FAO attributed this to increased availability of palm oil from Indonesia, due to lower export taxes, and the resumption of sunflower oil shipments from Ukraine.

Although dairy prices saw a two per cent drop, they remained 23.5 per cent higher than in August 2021.  The price of cheese increased for the tenth consecutive month, though milk prices “eased” following expectations of increased supplies from New Zealand, even amid projections of lower production in Western Europe and the US.

The price of meat declined by 1.5 per cent but remained just over eight per cent higher than the value last August.

Sugar prices also hit their lowest level since July 2021, largely due to high export caps in India and lower ethanol prices in Brazil.

Outlook for cereals and wheat

FAO has also issued its global cereal production forecast for this year, which projects a decline of nearly 40 million tonnes, or 1.4 per cent from the previous year.

The bulk of this decline mainly concerns coarse grains, with maize yields in Europe expected to drop 16 per cent below their five-year average level due to the exceptional hot and dry weather conditions affecting the continent.

By contrast, FAO expects there will be a “negligible drop” in worldwide wheat production resulting from expected record harvests in Russia and conducive weather conditions in North America.

Global rice production is also expected to decline by 2.1 percent from the all-time high reached in 2021. 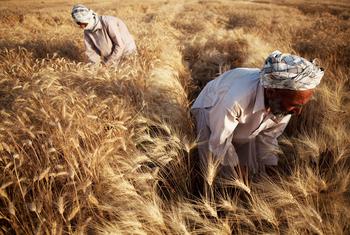 Food prices dropped significantly in July, marking the fourth consecutive monthly decline since hitting record highs earlier in the year in the wake of the war in Ukraine, the Food and Agricultural Organization (FAO) reported on Friday.