A long-awaited report by the Office of the UN High Commissioner for Human Rights (OHCHR) into what China refers to as the Xinjiang Uyghur Autonomous Region (XUAR) has concluded that “serious human rights violations” against the Uyghur and “other predominantly Muslim communities” have been committed.

The report published on Wednesday in the wake of the visit by UN High Commissioner of Human Rights, Michelle Bachelet in May, said that “allegations of patterns of torture, or ill-treatment, including forced medical treatment and adverse conditions of detention, are credible, as are allegations of individual incidents of sexual and gender-based violence.”

In a strongly-worded assessment at the end of the report, OHCHR said that the extent of arbitrary detentions against Uyghur and others, in context of “restrictions and deprivation more generally of fundamental rights, enjoyed individually and collectively, may constitute international crimes, in particular crimes against humanity.”

The UN rights office said that Wednesday’s report was “based on a rigorous review of documentary material currently available to the Office, with its credibility assessed in accordance with standard human rights methodology.

“Particular attention was given to the Government’s own laws, policies, data and statements. The Office also requested information and engaged in dialogue and technical exchanges with China throughout the process.”

Published on Ms. Bachelet’s final day of her four-year term in office, the report says that the violations have taken place in the context of the Chinese Government’s assertion that it is targeting terrorists among the Uyghur minority with a counter-extremism strategy that involves the use of so-called Vocational Educational and Training Centres (VETCs), or re-education camps.

OHCHR said that the Government policy in recent years in Xinjiang has “led to interlocking patterns of severe and undue restrictions on a wide range of human rights.”

Even if the VETC system has as China says, “been reduced in scope or wound up”, said OHCHR, “the laws and policies that underpin it remain in place”, leading to an increased use of imprisonment.

The systems of arbitrary detention and related patterns of abuse since 2017, said OHCHR, “come against the backdrop of broader discrimination” against Uyghur and other minorities.

“This has included far-reaching, arbitrary and discriminatory restrictions on human rights and fundamental freedoms, in violation of international laws and standards”, including restrictions on religious freedom and the rights to privacy and movement.

Furthermore, the report said that Chinese Government policies in the region have “transcended borders”, separating families, “severing” contacts, producing “patterns of intimidations and threats” against the wider Uyghur diaspora who have spoken out about conditions at home.

OHCHR said that the Chinese Government “holds the primary duty to ensure that all laws and policies are brought into compliance with international human rights law and to promptly investigate any allegations of human rights violations, to ensure accountability for perpetrators, and to provide redress to victims.”

Among the recommendations that the UN rights office makes in the report, is for the Government to take “prompt steps” to release all individuals arbitrarily imprisoned in XUAR, whether in camps or any other detention centre.

China should let families know the whereabouts of any individuals who have been detained, providing exact locations, and help to establish “safe channels of communication” and allow families to reunite, said the report.

The report calls on China to undertake a full legal review of its national security and counter-terrorism policies in XUAR, “to ensure their full compliance with binding international human rights law” and repeal any laws that fall short of international standards.

It also calls for a prompt Government investigation into allegations of human rights violations in camps and other detention facilities, “including allegations of torture, sexual violence, ill-treatment, forced medical treatment, as well as forced labour and reports of deaths in custody.”

In a long and detailed response published along with the hard-hitting report, the Chinese Government said in conclusion, that authorities in the Xinjiang region operate on the principle that everyone is equal before the law, “and the accusation that its policy is ‘based on discrimination’ is groundless.”

China said that its counter-terrorism and “de-radicalization efforts” in the region, had been conducted according to “the rule of law” and by no means add up to “suppression of ethnic minorities.”

On the issue of the camps, Beijing responded that the VETCs are “learning facilities established in accordance with law intended for de-radicalization” and not “concentration camps”.

No ‘massive violation of rights’

“The lawful rights and interests of workers of all ethnic groups in Xinjiang are protected and there is no such thing as ‘forced labour’”, China’s statement said, adding that there had been no “massive violation of rights”.

The statement calls on the international community to be “clear-eyed about the truth” of its counter-terrorism campaign in the region, and “see through the clumsy performances and malicious motives of anti-China forces in the US and the West, who attempt to use Xinjiang to contain China.”

It calls instead, for the UN and other international organizations, to investigate “the human rights disasters caused, and numerous crimes committed, by the US and some other Western countries, both at home and abroad.”

The human rights chief undertook her mission in May, at the invitation of the Chinese Government and visited XUAR to review the situation there.

During her mission, Ms. Bachelet spoke with a range of government officials, several civil society organisations, academics, and community and religious leaders. In addition, she met several organizations online ahead of the visit, on issues relating to Xinjiang province, Tibet, Hong Kong, and other parts of China.

At the end of her visit, while expressing concern over issues relating to Xinjiang, Tibet, Hong Kong, human rights defenders and labour rights, she praised China’s “tremendous achievements” in alleviating poverty, and eradicating extreme poverty, 10 years ahead of its target date.

A number of other developments in the country were welcomed by Ms. Bachelet, including legislation that improves protection for women’s rights, and work being done by NGOs to advance the rights of LGBTI people, people with disabilities, and older people.

The UN rights chief underscored the important role that China has to play, at a regional and multilateral level, and noted that everyone she met on her visit, from Government officials, civil society, academics, diplomats and others, demonstrated a sincere willingness to make progress on the promotion and protection of human rights for all.

In response to questions from correspondents at the regular Noon briefing in New York on Thursday, UN Spokesperson Stéphane Dujarric, said Secretary-General António Guterres had read the OHCHR assessment, which “clearly identifies serious human rights violations in the Xinjiang region of China.”

Mr. Dujarric said the Secretary-General “very much hopes that the Government of China will take on board the recommendations put forward in the assessment”, while also noting that the report “also underscores the importance of the independence” of OHCHR.

In response to a question over what this spelt for future relations, Mr. Dujarric said the Secretary-General “values the system-wide cooperation between China and the United Nations on a whole host of issues. China is a very valuable partner, and we very much hope that that cooperation will continue,” and urged it was “important for everyone to see the Chinese response” to the detailed report. 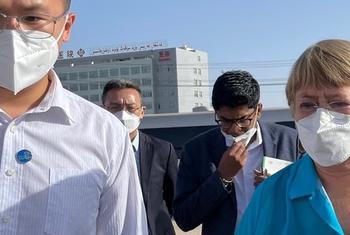 At the end of her official visit to China, the first such trip in 17 years, UN rights chief Michelle Bachelet announced new areas of engagement between her office and the Chinese Government on rights issues, and summarized the many rights issues raised during her six-day May mission. 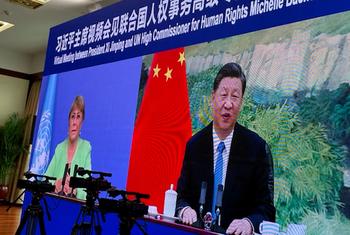 On day three of her official mission to China, top UN rights official Michelle Bachelet described having a “valuable opportunity” to highlight rights issues and concerns with President Xi Jinping and other senior officials, the first such visit by a UN rights chief since 2005.